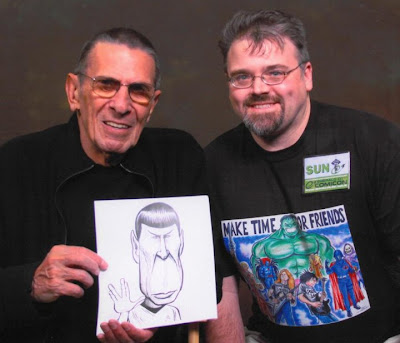 My former NCN Roomate, caricature artist, Steve Dorris, just made me throw up in my mouth a little bit, followed by me turning green with envy when I saw THIS pic hidden away on his Face book site. Theres Steve with MR SPOCK himself, actor Leonard Nimoy. Getting the pic WITH Nimoy woud have been awesome enough. Getting the pic with Nimoy holding your cariature of him? Priceless!
Steve did an excellent caricature of me some years back as the cartoon character , THE TICK, and also as DOG the Bounty Hunter.

See MORE of Steves great work at
http://www.gatorgrafx.com/
Posted by Elgin Subwaysurfer Bolling at 9:09 PM No comments: Links to this post