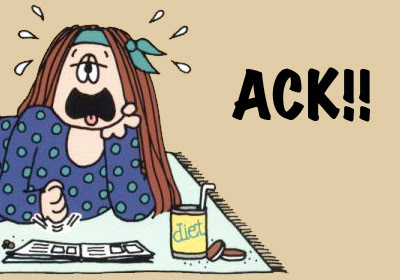 Just Found out today, that Cathy Cuisewite, is calling it quits and pulling the plug on her popular syndicated strip, “CATHY”

As Usual, I Had mixed feelings when I found out about this…

First off, let me say this…. You Gotta “give it up” for Cathy Guisewite, the strip's creator. Comics have been, and for the most part, still are without a doubt, a "BOYS CLUB" and a tough one at that. Cathy's strip has endured the test of time and while some may think the plot lines were predictable and past their ...time, the art "too simple" this lady had the guts to follow her dream, have her say and made people listen for YEARS. ANYONE can be a flash in the pan for their allotted "15 minutes" but there's something to be said for endurance. It is VERY challenging to come up with ideas week after week as i know WELL as an Editorial artist. Cathy deserves our applause.

Personally I don’t know WHAT'S wrong with creators today. As competitive as it is to get a syndicated strip PERIOD in the comic industry, you'd think that once a person is able to secure a position, find their niche and audience, that they'd want to continue that success. WHY is Cathy Guisewite quitting? according to the article she wants to pursue other creative endeavors I can understand THAT I mean just recently I've begun to focus more on my writing and poetry, but NOT AT THE EXPENSE OF MY ART!!! Let's not forget the income stream that comes with the strip in terms of salary, tee shirts, mugs and other periodicals. Why would she want to give that up to pursue OTHER endeavors? . I s doing a daily strip THAT difficult? To be sympathetic I do a weekly Editorial myself so I know in a sense how taxing it can be to come up with ideas on a regular basis, but it's the JOB of being a professional artist, and not to make a value judgment on Cathy, work ethic is something I find myself questioning when I read about successful artists "quitting" something. Other examples being Gary Larson of the Far Side, and Calvin and Hobb's creator, (whose name escapes me now)

It is for THIS reason why I highly respect the Late Charles Schultz. For 50 yrs, rain , shine, funny , not funny, good drawing, bad drawing, the guy put in work quite literally till he died. THAT'S commitment. Commitment to your craft, commitment to the fans. I suspect there may be other reasons Cathy Guisewite is quitting the strip , reasons that she's not obligated to share with any of us, but please don't tell me you're quitting to pursue other creative endeavors. Were ARTISTS we're the KINGS and QUEENS of multitasking.
That’s the rant for today.
Posted by Elgin Subwaysurfer Bolling at 12:55 PM No comments: Links to this post