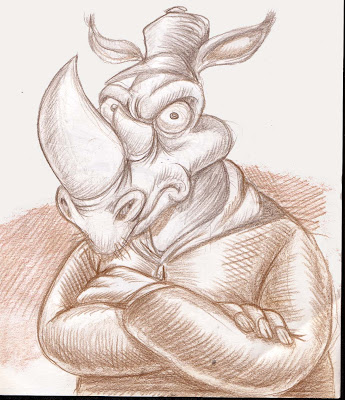 When a Rhino asks if you can spare a quarter, you definitely give him a dollar. Good thing that they arent allowed on the train. No one in their right mind would sell them a metro card.

Okay, what inspired this? I was on the train drawing one time, and this little boy was so fascinated that he screamed out, "Hey! can you draw a RHIO???" My mind went blank for a couple of seconds and then i produced one and gave it to him. I knew Id return and do another ever since... today was the day....
Posted by Elgin Subwaysurfer Bolling at 5:49 PM 1 comment: Links to this post

Giant Butterfly on the A Train 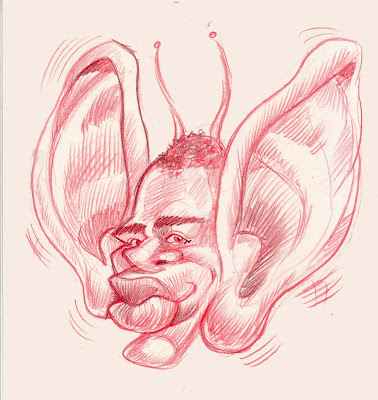 He had these.... ears......
Posted by Elgin Subwaysurfer Bolling at 6:09 AM No comments: Links to this post 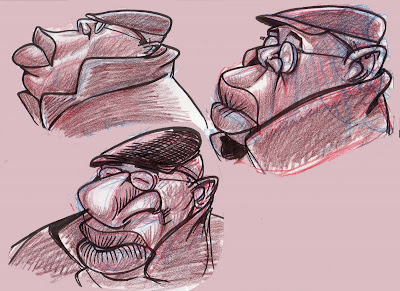 I had the pleasure of meeting Mr. James Shaw on the Manhattan bound A line some weeks back doing my usual subwaysurfing. We started off chatting about the weather, and in no time we became engrossed in conversation where we discussed politics, race relations, community affairs, jazz, and art. Mr. Shaw, 70 plus years old, looked years younger, and in a lot of ways reminded me of myself. He took off his hat at one point and showed off his RED hair which he proudly boased was natural and never went gray. I was delighted and amazed. His daughter, Janathel M. Shaw was a sculpture,whose most famous work, "Dead on Arrival" was featured on pg 163 of author, Judith Schwartz'sbook, "Confrontational Ceramics." I promised James I would mention this on the blog so it's a promise kept.
Mr. Shaw knew a lot about jazz and shared priceless stories about Miles Davis, Dizzy and Duke Ellington, and spoke about the glory days of Harlem. It was almost like being there. I did a couple of different sketches of him while we spoke not really satisfied with any of them, so I decided to post all of them here. I made sure that I gave him one of them as a gift which he folded carefully and put in his pocket. I also promised him that when it got warmeer I would check out one of the many free jazz fastivals that are played in the city. I hope to see him there.
Posted by Elgin Subwaysurfer Bolling at 12:04 AM No comments: Links to this post