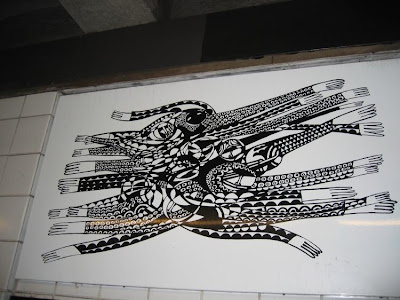 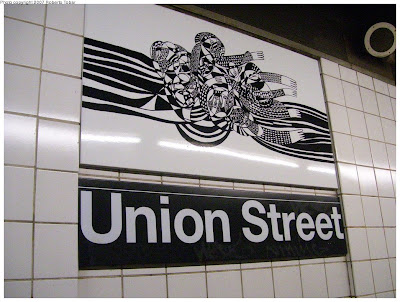 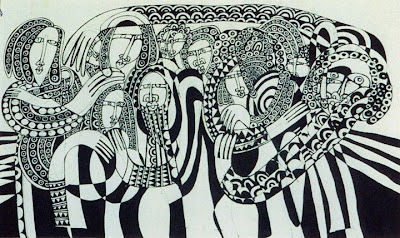 I will always remember the day that I got off the train at Union Street on the R line en route to an appointment, and knowing me, in a rush to get to my destination. I remember stopping dead in my tracks , in front ot the Union Street sign, where I came face to face with Emmet WIgglesworth's subwaymural. I was familiar with his work and recognized the style instantly. Wigglesworth;s famaliar theme of figures juxtaposed together in a maze of afrocentric faces invoked images of ancient African tribal masks and woocarvings, elongated fingers and arms covered with mesmerizing black and white patterns.... It was classic Wigglesworth, and I could only stand there reminiscing our meeting years ago. Back in the day, I lived for a time in the Bushwich section of Brooklyn, and although I cant for the life of me remember how I found this out, but I discovered that Wmmet Wigglesworth lived within walking distance of my house, so with the impeturousness that only a young person could have, I called his home, and within minutes was seated there in his living room discussing his career, and my art. I was very inexperienced back then, was newly married, and had a passion for art, but didnt know where or how to channel it. I will always be grateful for Mr. Wigglesworth opening up his HOME to a young artist who was a total stranger, and sharing his time with me. For a while I even imitated his bold black and white afrocentric abstract stylings, until I discovered my "own voice" . I guess you can say in a sense, Wigglesworth was instrumental in teaching me how to walk.

I look forward to the day that I can be just as gratious to a young artist.

Go to UNION STREET on the R Line in Brooklyn to see his work. You wont be dissapointed.


Check out this youtube clip of Wigglesworth "droppin' some serious science" on The Advertising Industry and how it affects self esteem.

Posted by Elgin Subwaysurfer Bolling at 7:59 PM No comments:


Jacob Lawrence, is an unsung hero of the sequential art form we've come to know as Comics. Before I continue, let's look at the dictionary's definition of the word...

AComics (from the Greek κωμικός, kōmikos "of or pertaining to comedy" from κῶμος - kōmos "revel, komos",[1] via the Latin cōmicus) is a graphic medium in which images are utilized in order to convey a sequential narrative;

Lawrences' epic work, THE MIGRATION, consists of 60 paintings combined with words that tell the story of the American Negro's migration from the south to the North. I am currently doing more reading on this fascinating subject, but dont let me stop you from checking out the video.

Oh By the way, Jacob Lawrence was the first African-American to be represented by a New York City gallery.
Posted by Elgin Subwaysurfer Bolling at 7:37 PM No comments: 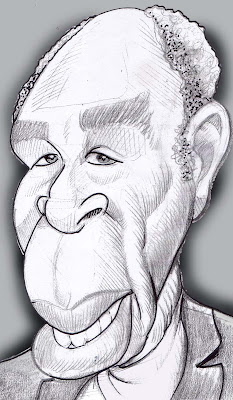 In hearing George recall the "old days" of illustration, I couldnt help but be thankful for the computer age I live in and how it streamlines jobs that are non existent now. "In the old days, we did paste up with type using literal tweezers, peices of cut out paper and rubber cement!" I also became sort of wistful that many of the jobs available to illustrators back then are not as available now. Photography was expensive, and companies used illustrators to help them advertize their products in print and tv, recalled George. There were also, a couple of "B List" companies, that artists starting out could cut their teeth on. " I did greeting card work for Hawthorne Summerfield, and Williamsburg Publishing, which no longer exist"." In those days, Hallmark Geetings was the best, and one of the first companies that really used the power of branding. They KNEW they were the best, and used it in their tag line, "Hallmark, when you care to send the very best". Ford also considered his illustration work with Harper's Magazine to be his first major illustration job. " It was an article on African American author, Ralph Ellison".
While on the subject of illustration, George took care to point out that illustrators need NOT fear art directors/editors when interviewing for a freelance position.
"believe it or not, they are NOT looking to eliminate you, on the contrary, art directors/editors WANT you to succeed, to be "good" because they want someone who is capapble to help illustrate their product or idea"."Frequently after having your work reviewed you may hear the comment, "this is not what we're looking for, right now". "dont take this PERSONALLY" "It's not a reflection on your talent or work, it's just that it doesnt fit the companies niche at that time""It's important that every artist find their OWN niche".
Having said that, I showed him work that I'd done recently for The Wave Newspaper, and other caricature work I'd done for Rocketshark Ringtones a while back. He commented on loving the line quality of the work, being reminiscent of Hirschfield, to which I smiled, Hirschfield being an influsence. "The rest, of course, is YOU" he added, with a smile, before going on to instruct me of how caricature could be used in publishing.
"Caricature CAN be used, he began, but It's important, HOW subjects are depicted. The caricature must be used to enhance what is being spoken about and not used simply as an object of out and out ridicule." In Ford's view, the caricature should show just enough visual information to indentify the subject whichout making them look ridiculous for it's own sake. I was happy for the critique, and looked up to see that three hours had passed and I really had taken up much of his time. I thanked him for an interesting afternoon, and we left out table much to the delight of a stranded yuppie desperately looking for a place to sit.

There's such a wealth of information the man had that I didnt even manage to scratch the surface with. I encouraged him to start his OWN blog just so that the information he obtained in over 50 years in business would not be lost. He assured me that he had been newly inspired to do so and would get started on it immediately. I smiled in anticipation. I cant wait to see what he writes down.
Posted by Elgin Subwaysurfer Bolling at 9:26 AM No comments: