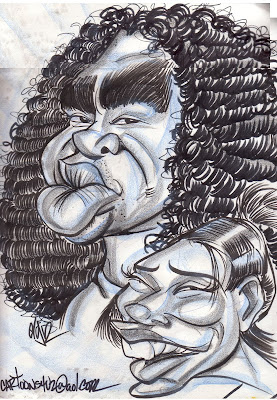 This guy has such outstanding EVERYTHING it was hard to focus!!! Great hair, THICK eyebrows, large lips, a very full meaty face,and a massive build, but not fat, just... huge like a Samoan, only he was Puerto Rican. He had the skinniest girlfriend though and the contrast was so interesting that I had to literally have them stand apart so not to get distracted. Wish I could have had enough time to do the bodies, but these two are definitely going to make an appearance one day in a cartoon or character design of mine!!
Posted by Elgin Subwaysurfer Bolling at 8:30 PM No comments: Links to this post