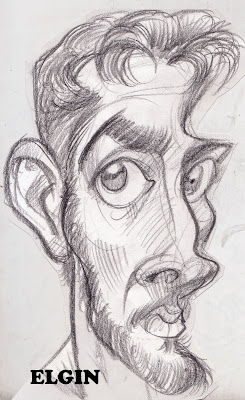 I boarded the train at Chambers Street after an enjoyable afternoon in the city. I sat down next to this young man who had such a great face for caricature I could not wait to bet started. I had already been drawing for a little while much to the amusement of onlookers, and was in such a generous mood that I'd been literally giving caricatures away throughout my commute today. "who are you drawing now?" his female companion asked... I'm drawing your boyfriend, I replied. He has a great face!! and went immediately to work having just passed Jay Street Boro Hall. Thanks, He replied, but Im getting off next stop. I knew that the Hoyt street station was less than 30 second s away so I quickly made a gesture of him promising that I'd upload a memory sketch this evening. THIS is the final drawing.
One man was so impressed, that he gave me his business card and "demanded' a call! this was my second "demand" of the day, the first being an Advertising executive that Im currently doing a logo caricature for.
Definitely a good "hunting day!"
Posted by Elgin Subwaysurfer Bolling at 7:38 PM No comments: