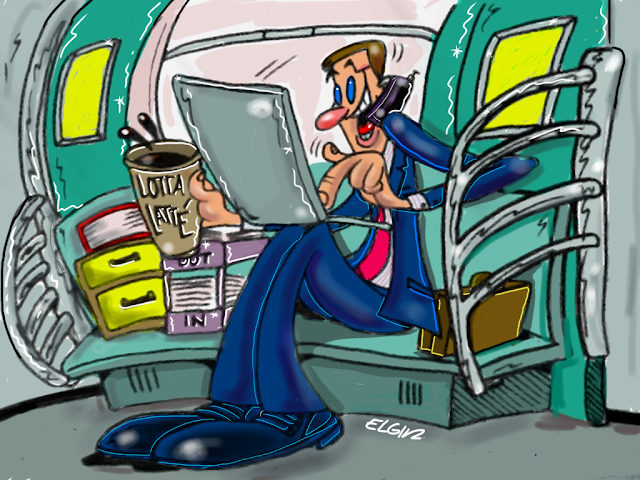 As I'm sitting on the train vegging out one day, not even remotely interested in drawing, which is extremely rare for me,I happen to glance up, and regain my creative conciousess long enough to spot my muse.
If you've been on a New York City Subway lately, it's becoming increasingly hard to tell if your actually riding a commuter train, or sitting down inside BEST BUY, or the APPLE Store!
Electronic gadgets are EVERYWHERE! People are talking on cellphones, playing, video games on playstation devices,popping their fingers while listening to iPods, swaying to unheard beats with gigantic headphones! And that's only the beginning! You see women of all ages, with contorted faces of intense concentration, playing games on their cellphones, teenage girls typing at breakneck speeds, texting with their thumbs, and incredibly, people with DVD players if every size and shape,watching movies like they're in they're living rooms. If course, there are the ever present iPads, iBooks, and laptops.

Judging by what you see you never ever would have believed that at one time there were actual announcements to COMMUTERS to NOT display their electronic devices! Man!it's unbelievable How far we've come!

Which brings me to my muse...

In the middle if this intense scene of talking, texing,and video viewing, was thus businessman with this enormous laptop typing as casually as he might in his own office. With Wifi soon to be coming to the subways, followed by an increase in cellphone reception power, I see the subway itself becoming even MORE of a mobile office than it us now! In the future the need to "go to work in an office" will be totally obsolete. The subway car itself will BE your office! I thought ud illustrate my vision by drawing an executive hard at work,multitasking if corse, talking on the cell to a client,which simultaneously emailing over a contract, in operation to take a sip from his hot frothy latte (there will be latte vendors on trains in the future folks).
Posted by Elgin Subwaysurfer Bolling at 9:51 AM No comments: Links to this post