ipad caricature of Manhattan Female Yuppie with Latte By subwaysurfer 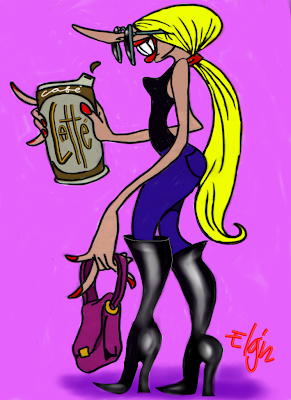 There she was withher bag, her boots, her designer Jeans, Her Two Inch Waistline, her Golden Locks, and her Yuppie Latte.... the universe is complete now. How could I NOT draw her? As beautiful as she is... I bet her feet stink in those leather boots...ah! The price of fashion! What's rancid feet, if you're being fashion forward!
Posted by Elgin Subwaysurfer Bolling at 3:06 PM 1 comment: Links to this post

THE MAKING OF AN AVATAR Creating "Captain Actuary" Part two

In My previous post I explained how I crashed and burned on an assignment because I made the mistake of putting "more of myself" into the project than was neccessary. In This Next attempt, I restudied the picture, and decided to draw it with "more estrogen" in mind than Testosterone. 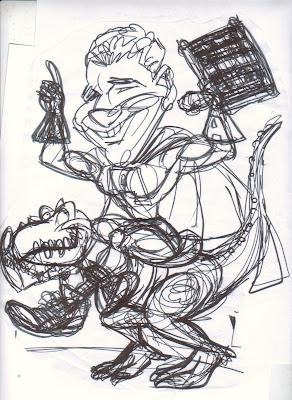 STEP ONE ROUGH SKETCHING
Like in the previous example, I still sketched very rough and very fast in order to ride that wave of emotion neccesary to get the life into the drawing. THIS time, I was thinking on a more whimsical level. As a result, my line quality is less sharper, more rounded. 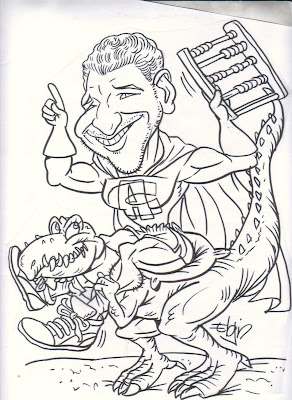 STEP TWO TIGHTENING UP THE ROUGH
Here is where I really start finding the forms. I concentrated a lot more on making things more proportionate, although there is still a level of exaggeration. The Abbacus has more of a prominent role, and Ali, The Allosaurus, has a more "Dino Essque" feeling about him. The facial proportions are a lot more "human" looking, the dreadful Hood on the cape thing is gone, and I've also payed a lot more attention to the "CA " Insignia on his chest. Remembering that he is a runner, with very well developed leg muscles, I wanted to emphasize that, so I put him in running shorts and shoes, showing off the bare legs. To add more comic relief i reasoned that if I was riding a dinosaur he would feel pretty rough, Hence, the addition of the pillow. 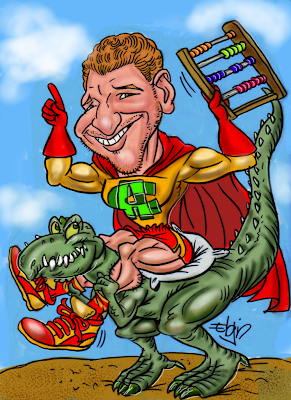 FINALLY COLOR!
It goes without saying that Coloring is the best part of the whole thing! Once satisfied, I immediately mailed it off to the client who went absolutely nuts over it!

If theres any lesson to be learned here, its that you should always please the customer first when doing freelance work. Dont be afraid to be critical of your work, take a step back and observe it, you may surprise yourself.

It goes without saying that If you want your own Cartoon Avatoar where i make you into a superhero you, or just plain cartoon you, dont hesitate to drop me a line!

"...I WANT YOU TO MAKE AN AVATAR OF MY BOYFRIEND, HE'S AN ACTUARY!..."
I recieved this email from an enthusiastic female client, who wanted to surprise her Actuary Boyfriend with a unique Valentines Day Gift in the form of an Avatar. I was glad that she couldnt see me scratch my head as i wondered just what an Actuary was, and did. I found out that  an Actuary is a financial professional who specializes in risk analysis. They use statistics and other mathematical formulas to calculate the risk of financial instruments. Which means her Boyfriend is a pretty smart guy.

As always, I asked her to email me some great pictures of him that showed front side and three quarter view, and to include a character description of his personality, work habits traits, etc. So that i could use my genuis imagination to construct a humorous caricature/avatar/  I then had to put my genuis on hold as she gave me one of the greatest things that any client can give a caricature artist. A BACKSTORY!!!!  It seems that her pet name for her beau, was "Captain Actuary". She explained that he solved problems with his "ABBACUS OF TRUTH", and being an amatuer paleontologist, he rode. as his Noble Steed, "ALI" the ALLOSAURUS! Continuing on, she explained also how her boyfriend was an avid runner, and as a result, had very large leg muscles. In the course of our conversation, she had provided me with more than enough "visual hooks" for me to  sink my caricature invested  brain into !
We had almost too much fun on the phonecalls devising ways i could have fun breathing life into "Captain Actuary" and I said my goodbyes, and enthusiastically went to work.

STEP ONE:  ROUGH IT OUT FAST!
Whenever I create a character I ride the first wave of emotion that comes to me and immediately rough out the look and postion of the character. At this stage my emotional connection to the drawing is the most important aspect. I like my pictures to have the feel of the character either "getting ready" to move or "in the midst of moving" and drawing quick enables me to do that.  I draw very quickly using the other side of the Tombo Brush pen, which has a nice fine tip marker that is excellent for making rough sketches. As far as the face goes I look for really strong geometric shapes that I can exploit. I do my initial drawing s on tracing paper  knowing that i will go over the rough sketch in the second stage.

STEP TWO: B:OCK IN THE MAIN FEATURES;
Once satisfied with the initial quick sketch i slow things down a bit and really start looking for the main shapes that are going to define the drawing. I start paying attention  How all the propls that make up the caricature will be presented. The face is very important6 at this stage so i really take my time to get that right.  I also start esperiementing more on how individual proportions relate to each other. Even though one pictue is shown here I due about two or three progressions before proceeding to the final stage.

STEP THREE: PUTTING IT ALL TOGETHER!
Once Successful In the two previous stages, Im not ready to go full out and ink it before taking it to the coloring stage. Once i get to the final inking stage i get very meticulous about my linework and never rush. It's important to love every stroke you do, and not to '"veg out" on your drawing. I want to have as much an emoritonal connection at this stage as i did in the beginning. Since I am now adding very definite expression to the drawing, in the case of the Allosaurus  especially i want to be sure to get that right. At this stage ive also added additional elements like a kind of collar to the cape, the "Captain Actuary" "CA" Insignia to his chest, as well as refinitng the look of his Abbacus of Truth.  Once this final Inking stage is done, I do one of the hardest things that i have to do as an artist. I divorce myself emotionally from the piece, and take a hard objective look at it.  Within minutes, i can see that I need to do this over, because Ive gotten it
ALL WRONG!
There was nothing wrong with the physical likeness, perse, but one look at the picture made me realize that instead of drawing for the client, I had "drawn for myself."   My client was a female. This was a gift for the man she loves, and while she allowed for a certain "comic license " on my part, Im sure she didnt want me to "drive off the road" Trying to look at this from a womens point of view, I asked myself would I like this? Probably not. The Allosaurus was too ferocious looking, and the foot was obstructing  the view its head besides. The "BIG FACE" little body angle wasnt really working, here and ended up making her boyfriend look kinda goofy in this pic. Im sure she wouldnt appreciate that. The Abbacus of Truth, seemed like it should have a more prominent role in terms of size, and the "CA" Captain Actuary Insignia, was just downright Lazy! Oh yeah, and what was up with the collar on the cape thing? Overall, I had done an exaggerated wacky portrait that I WOULD HAVE LIKED, but when we are drawing for others we must think in terms of them. As an artist, you must be willing to swallow your ego and start at the drawing board again...... which is exactly what  I did..... See part TWO of
HE MAKING OF AN AVATAR Creating "Captain Actuary" By Subwaysurfer
Posted by Elgin Subwaysurfer Bolling at 1:03 PM No comments: Links to this post