PRAISE FOR THE iFaraday Stylus for Ipad users By Subwaysurfer 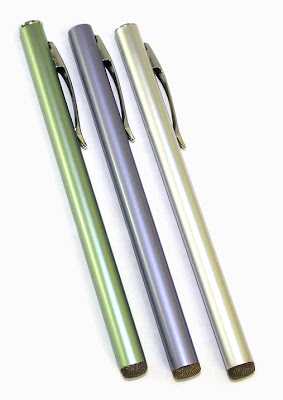 let me just come right out and say it, folks. The ifaraday stylus pen for Ipad is a digital artists dream come true. I'd been using the infamous POGO STYLUS, that's sold in the Apple store, and realized within a couple of hours that THIS was NOT the best tool for anyone who is trying to draw seriously on the ipad. I consulted Angie Jordan, and Scott Sullivan of the Digital Blacksmiths for their advice, and was told about the magical mystical ifaraday stylus which is noted for it's responsiveness, and "pen like" feel. It took some weeks to receive my ifaraday, due to tis immense popularity, it was on back order, but it finally arrived, last week. Within MINUTES I knew that I would be spending a small fortune, keeping myself well stocked with this pen! It's thicker than the POGO , the drawing tip doesnt jut out like a giant Q Tip, and it's responsiveness is "like butter" on warm bread. I was sketching so easily with it that at times I forgot I was using a stylus. I have these "big sausage like" fingers anyway, so the thickness of the pen felt good in my hands also. I would recommend this pen to any artist SERIOUS about doing digital drawing or painting... which... is kinda bad... now that I think about it... you all will be ordering these pens and causing MORE of them to be on back order~~ I'd better put in my order today, before the Christmas rush!

Dont take MY word for it, though, read a short excerpt from their website at

http://ifaraday.com/
What makes the iFaraday stylus different?
The iFaraday tip is made of soft cloth which glides smoothly across the screen. It won't scratch or leave a mess on your screen. The iFaraday stylus requires the lightest touch, just enough to provide tactile feedback.
The iFarady has a pliable, symmetrical tip which functions at any angle. The tip conforms to the screen such that a planar sphere is reflected on the screen surface, like a human finger. (Touchscreens are optimized to look for the shape of a human finger.)


On another note, what's so cool about the iFaraday, is that it's creator, made it originally NOT  to make a "buck"  but purely for LOVE!  read THIS excerpt from the page:

Rustle Laidman developed the iFaraday stylus for his wife, who likes to play 'Bejeweled' on her iPhone.

The Subwaysurfer is using the IFaraday for ALL his Digital Caricatures. If You would like a custom made gift caricature using this fantastic product, please contact me for rates! They are more affordable than you think, and can be delivered straight from my ipad to your email box!
cartoons4u2@aol.com
Posted by Elgin Subwaysurfer Bolling at 11:58 AM 3 comments: Links to this post