With ST Patricks Day fast approaching,(this was posted a couple of days before March 17) I thought I'd share this illustration and poem I submitted to a client recently. The client wanted to make known that ST. Patrick was not just an urban legend", and the original illustration, in black and white, is being used as a coloring page for youngsters. What I loved about this assignment was the research I dd on the man. I gotta admit, I got a kick out of discovering he wasn't Irish! It's enough to make a leprechaun fall off his rainbow and drop his pot-o-Gold!

ST Paddys day is big business in New York where I live. We host the mega ST Patricks day parade, retailers are selling green shirts hats, flags, you name it! Even Mcdonalds has green ketchup that day!

Don't even let e get started on bars, and beer. It's a regular drunken paradise...

People really ought to look deeper.maybe this poem will encourage that.

Just for fun, go ask someone on March 17 who ST Patrick is, and ask what he did. the answers or lack of them may surprise you... 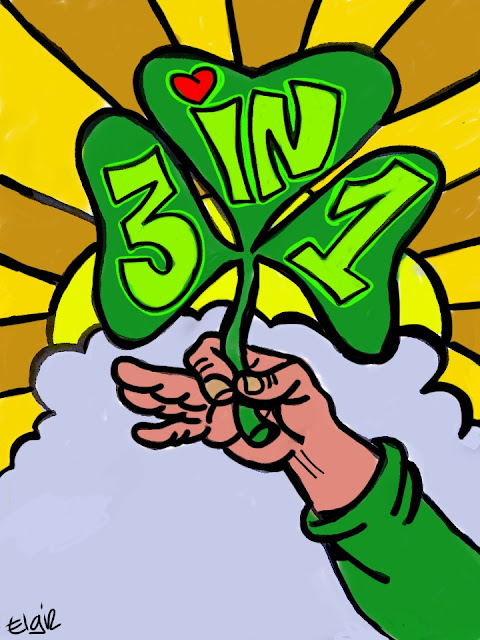 ST. Patricks day! It's finally here!
Let's celebrate with lots of beer!
I grab a red headed "Bonny Lass" and yell to her,
"Refill my glass!"

Millions walk the streets in drunken stupor...
That Big Parade! It sure was Super!

"kiss me, I'm Irish! " I hear people say,
Blowing on bagpipes throughout the day!

In all this laughter and gayety,
Do we ever KNOW who St. Patrick be?

He was a missionary, not brash, or "stylish"
Of Roman birth, he's not even Irish!

Kidnapped by Irish raiders was he
Was thrown into cruel slavery!
He was forced to work, and without pay!
After six long years he ran away!

He could have felt bitter, and that's a fact
But God told him, do not attack
Instead he told Patrick to come right back!

To preach the Gospel of love, and peace
And this, he did, and did not cease
He preached to the highest, and to the least
Millions of souls, they were converted
Even though Patrick was the one they hurted

He loved the Irish people, and did not faint
And that is why he is called a Saint.

He used the three leaf clover you see,
To teach the Holy Trinity
The three in one, a mystery!

So on this day when you drink your beer,
You should raise your glasses, and give him a cheer
To a man who sacrificed, who paid a price
So that you might know the sweet love of Christ.

Posted by Elgin Subwaysurfer Bolling at 9:51 AM No comments: Links to this post

Posted by Elgin Subwaysurfer Bolling at 9:21 AM No comments: Links to this post

If making comics have fascinated, agitated, frustrated, and mystified you, have no fear, true believers, Subwaysurfer tells you hw to make comics, the easy way! This is part one two or three of a thirteen part series, the rest of which I encourage you to check out on my YouTube channel. In these talks I don't focus on the familiar mechanics of character design, page about and formatting techniques, or penciling and inking as other tutorials commonly cover. Instead, I focus on the intangibles, like getting ideas, and storyline creation, which I feel is even more important than the actual drawing aspect.

My theme throughout these videos, is that we all have compelling, thought provoking stories that we can and should share with the world. Hope you not only tune in, but practice what I'm preaching here!