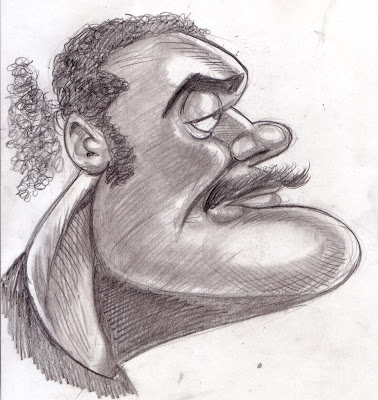 Some people just need to let go of youth.... this forty something dude looks ridiculous wearing his hair like this.....
Posted by Elgin Subwaysurfer Bolling at 7:42 PM 1 comment: Links to this post 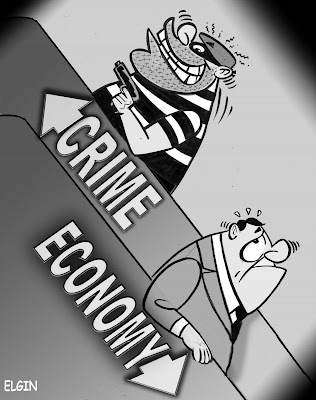 Latest Editorial Cartoon Drawn for The Wave Newspaper in Far Rockaway. As Times get tougher some are using it as an excuse for being "criminally minded." There was a recent push/in Robbery one week where the robber actually said to the victim, "Nothin Personal, It's the Economy!" As he pushed his way in. (He was caught by the Police, by the way)
It's funny, How people are linking an increase in Criminal Activity as a result of a failing economy??? Let's get REAL for a minute here. "Joe Stockbroker" whose lost his job, or his stocks recently aint exactly putting on a stocking mask, purchasing a gun, and robbin old ladies at gunpoint!
Maybe SOME may result to this type of desperate activity, but not MOST. One of my favorite movies, with Jim Carey and Tino Leoni, "Fun with Dick and Jane" will make you laugh as you ride the wave of this failing economy situation we all find outselves in.

To continue with my rant though...

The FACT is that Gansters do "Gansta stuff" like Drug dealing, Mugging, Shoplifting etc. In a "GOOD " Economy, "BAD" Economy, and everything in between! They ALWAYS have!! I wish folk would stup blaming EVERYTHING on the Economy! Some people are just "no good" cause they've ALWAYS been NO GOOD!!!
Posted by Elgin Subwaysurfer Bolling at 11:53 AM 1 comment: Links to this post