1960's time warp pictures on the A train 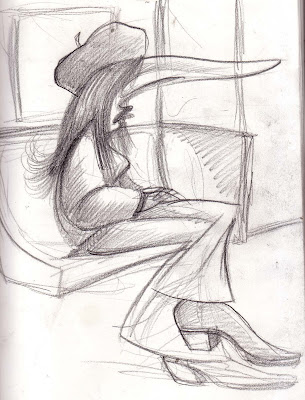 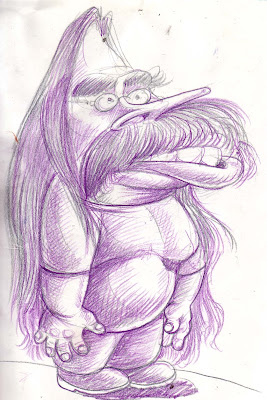 These two were hilarious to draw. I know it's stereotypical to draw the BIG nose on people as a caricature artist, but what can I say? this lady's nose was so outstanding I had to draw it. I wanted to add a little background info also. Maybe that is what I will do more in subsequent caricatures just to add more context to the pictures. I like the "movement " that I've got going with the Nose and those funky boots of hers. Same type of "visual rhythm." She had this type of "beatnik" look about her, and I could imagine her at a jazz club or speakeasy listening to improv poetry, surrounded by cigarette smoke,sitting at a table with a cup of java, slowly nodding out. She even wore Bell Bottoms. Only in New York could you actually find someone looking like this in "real time".

The Hippie Dude with the long hair and walrus mustache had this look on his face like he was wondering what happened to the sixties or something. When i finished drawing this it had a Robert Crumb feeling to it, which shouldnt be strange since he is an artistic influence from long ago.
Posted by Elgin Subwaysurfer Bolling at 5:29 PM 2 comments: Links to this post