Interview: WHYAM I DRAWING SO MANY COMICS NOW? 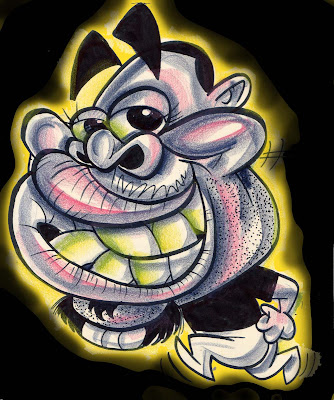 Although you didnt ask, I've decided to talk, so since you're here anyway, you might as well listen!

You may have noticed that as of late, Ive been doing a lot less subway clowning caricatures and more and more cartoons. The reason for this on one level is due to my accident I told you about last year, and drew a comic about as well, when I fell down two flights of stairs in my house. This limited my mobility to the point where I really cannot travel as easily as before, and those daily trips into the city where I ride the trains and clown the people are temporarily impossible. I was depressed as you might imagine, and having nothing outwardly to focus on I began to look inward.
I've always loved the medium of comics, like most artists, but after reading the work of my heroes, Crumb, Schultz, Don Martin, Hank Ketchum, and others, I felt my little "whiney voice" was too insignificant to make any kind of dent so i put that dream on the back burner. My accident caused me to stop and think about what effected me, what i liked, disliked, what my point of view was. I decided to write/draw on that, first as a form of theraphy, to keep my mind occupied, as not to slip into depression, and found that there were a lot of stories inside me, particularly ones that dealt with the industry that I've worked in these past few years, and the trials and tribulations of being an artist. On a more mundane level, I began to think about my relationship, with my dog, and thought how I could twist that. All of a sudden now all kinds of child hood, teenage and young adult stories are emerging , all wanting to be told. Im in the process of writing and drawing those now even as we speak.

Although I'd like to be paid, I've come to expect that maybe as an artist, that's the one thing that holds me, and sometimes other artists as well, from creating. When i was younger, i would spend hours drawing happily just for it's own sake, without any promise of financial or verbal reward. I firmly believe i was held back from doing comics because I was judging myself by the standards of my heroes who were "making money" and felt that if i couldnt produce similar "money making " work that it was worthless.

Looking back I can see that Ive pretty much always done SOME form of cartooning and comics, having submitted a lot to the NCN Trade Magazine, Exaggerated Features , and other places. I was just too dumb to realize this because I wasnt creating stuff in VOLUMNE.

Another observation Ive made since being homebound is that Im no spring chicken anymore. When i was younger, I would have laughed at my fall, dusted myself off, and trotted outside to do handsprings. Getting older makes you realize your mortality, and also makes you want to tell someone, anyone what you think, what you saw, what you did.

It's also been refreshing to know that i do have more than one artistic voice inside of me. For the past couple of years, Ive "spoken in the caricature voice" I love that voice, and have gained some fluency in it, but now it's the time to speak in the "cartoonist comic artist voice" . I cant wait to see what happens when I combine those two voices.

I guess i should shut up now...


As usual, Im taking a long time to say things. Why do I do comics now?
Because I enjoy them.
Because It's a way of telling my story, only if Im the only one who reads them.
Because it's a way of maintaining my mental , emotional health.
I guess, in a sense, it's helping to heal me.
And you cant put a price tag on that.

NUFF SAID.
Posted by Elgin Subwaysurfer Bolling at 5:55 PM No comments: Links to this post 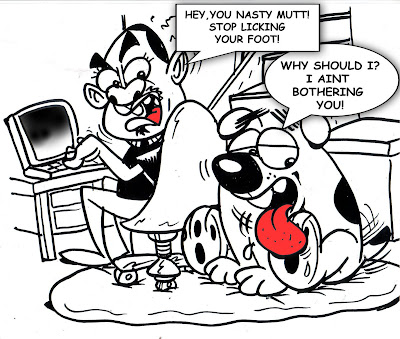 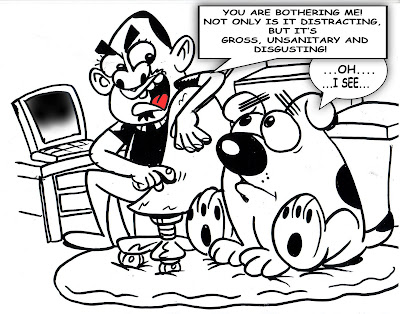 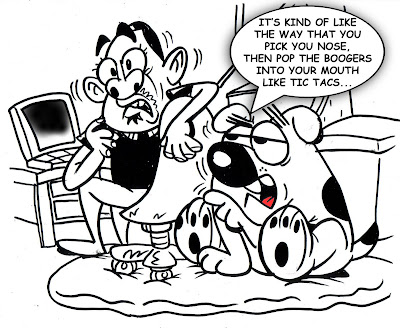 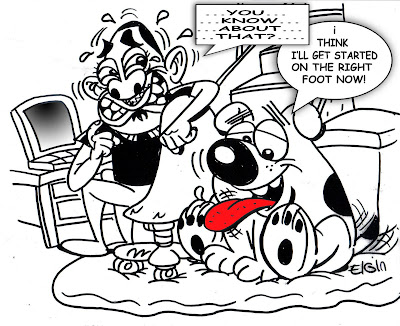 Ah, the continuing episodes of me and my Pit Bull Butchie. Butchie DOES have this distracting habit of footlicking that drives me crazy, and as for me... well... I added the part about me for comic effect lets say! LOL! I guess the LESSON in todays cartoon has a lot to do with the human tendency to find fault in others but be ignorant to the faults of the man or woman in the mirror. We really think the things we do are "hidden" but as my grandmother used to say, "someone ALWAYS sees you!" even if it's just God.Jesus told a parable once about a person trying to remove a speck outta the eye of someone all the while having a beam(of wood) stukk in his own eye. He advised that the person first take the beam outta his own eye first so he could see clearly to take the speck outta his brothers eye. Knowing your own faults first keeps you humble. Hope you enjoy the cartoon.

Honestly though, my dog's licking is so loud and furious that it has literally woken me an my wife outta our sleep at night!


It's really old advice but i really encourage anyone who wants to make comics to look at the little mundane things that happen everyday in your life and start from there. It certainly has freed up my imagination.
Posted by Elgin Subwaysurfer Bolling at 11:47 AM No comments: Links to this post