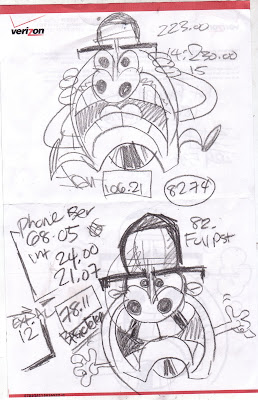 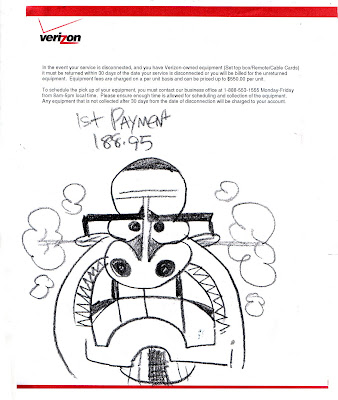 Like most Americans these days, my cell phone has become my primary phone and I pay my lan line bill so I can access the internet. Once upon a time if you paid your BASIC service agreement it included internet as well... NOW Verizon had gotten smart and requires you MUST PAY THE FULLLLLLLLL BILL or they will not turn on your internet... As I was on the phone playing "LETS MAKE A DEAL" I was getting angrier, and angrier and all the while drawing aimlessly.
I looked down and these were the hilarious results.
Posted by Elgin Subwaysurfer Bolling at 7:29 PM No comments: Links to this post 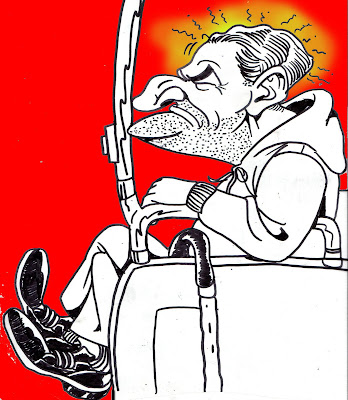 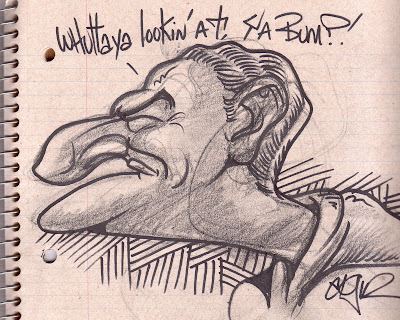 Yeah, yeah, I KNOW this blog is about SUBWAYSURFING, but some faces are too good to pass up!!!
Take this old man for instance I saw riding the Q22 Bus here, I mean, he looks like the stereotypical "Cranky old man" out of central casting! Dont know what he was mad at, but his eyes were narrowed to literal slits! LOL. He had a brilliant "old man" profile, complete with the stereotypical "hook nose" and a chin that jutted out so far he could jab you with it, and leave a mark! LOL!! No "stereotypical old dude" would be complete unless he had a cane too, and you betcha, he had one! LOL!!

I felt so inspired by his face, I did another memory sketch of him later that captured his essence even better than the first.

DADDY DUM DUM on the A Train 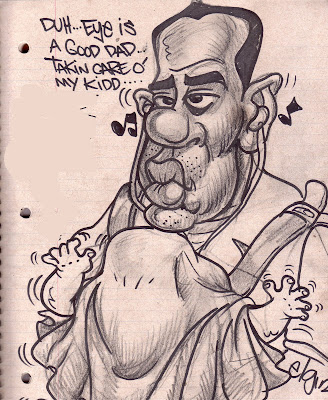 Ah Fatherhood!!! In an age when so many men are irresponsible ib "manning up" and taking care and responsibility for their children, it's always refreshing , inspiring , and sometimes even frightening to see a new proud dad with his kid....

Take THIS guy for instance in this picture. I caught him riding the Manhattan bound A train one afternoon, eyepod headphones in ears, wearing one of those familiar devices that I call a reversable backpack, which seems to be specifically designed... probably by a WOMAN... to give men a taste of what it feels like to carry a 12 bound baby on their stomach. This dad had his child wrapped up so tightly in a blanket as well that the kid was barely visible beneath the blanket, pressed up tightly against his dads chest in that ridiculous backpack thingee, while the dad was staring aimlessly into space grooving on Hall and oates or whatever he was listening to on his ipod.

IS THAT KID GETTING AIR????? I wondered to myself.... WAKE UP DUM DUM, YOU MAY BE SUFFOCATING YA KIDD!

I know I was!
Posted by Elgin Subwaysurfer Bolling at 11:17 AM No comments: Links to this post

R and B Train recent subway sketches by Subwaysurfer 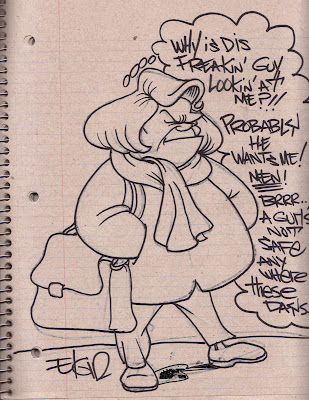 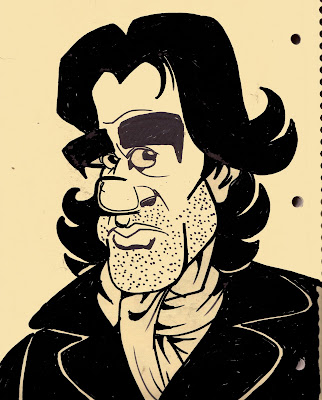 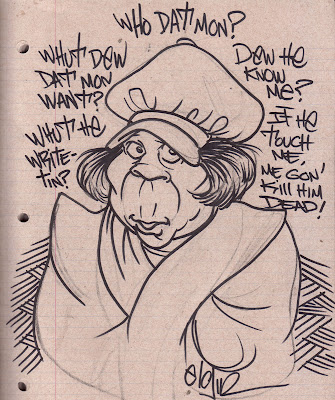 I found this great cheapie 99cents spiral notebook that has this fantastic recylcled paper that has the consistantcy and feel of newsprint, but just a tad stronger. I LOVE it! Its has 100's of pages, it fits neatly into a knapsack, or under in my heand, it's big enough to get a good sketch with, it takes to pen and pencil fabulously, and it makes me feel like Im back in Junior Hish school "drawing on the sneak" while in class... PERFECT for subwaysketching!

Ive been riding the "R" and "B" Trains lately, and have noticed that folks are a littttttle more suspicious and agitated on this line than others. Most Manhattan commuters almost expect to see something out of the ordinary when they ride, but commuters on these trains, especially when going back to Brooklyn seem genuinely surprised to see the stange man staring at them while moving his pencil furiously in his notebook......
Posted by Elgin Subwaysurfer Bolling at 11:08 AM No comments: Links to this post