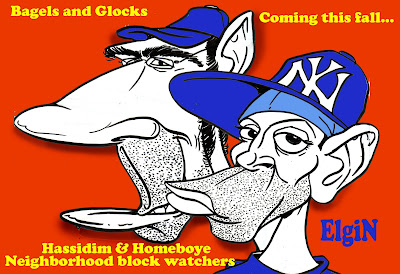 
Originally, these two caricatures came out of my subwaysurfing travels. The Homeboye was drawn while riding a Manhattan Bound A train, and the Jewish man was drawn (and sold) while doing Street Caricature in the park.(He had such a memorable face that i couldnt forget him!) I started to upload them seperately, but the more I looked at them, I found my mind going back to my old Brooklyn Neighborhood, Crown Heights. Crown Heights is a neighborhood that is made up of African Americans and Hassidic Jews. Eastern Parkway is the "invisible dividing line" that literally "seperates" the two sections. If you past the line going twds Fulton street, you will be in predominately African American territory, and if you past the dividing line going towards Crown street and Empire Blvd, you will be in predominately Jewish neighborhood. When i was growing up the two groups lived pretty much in harmony, one respecting the other without to much incident. The neighborhood gained national attention during the Dinkins Administration when a riot broke out in the neighborhood resulting in the death of a young Jewish scholar and an African american boy. This incident set up racial tensions that reverberated for years, and I couldnt help thinking how great it would be if the two races got together to work in harmony and fight a common enemy, namely crime. I would be great if the political savvy Rabbis could some how pair up with the street smart homeboyes to form some sort of posse. I thought how hilarious and entertaining such a pairing would be. Perhaps someday, I or someone else will do some sort of graphic novel, comic or series on the subject. When that happens make sure you give the SUBWAYSURFER the credit for sparking the idea!
"BAGELS and GLOCKS" seems to be the perfect name for the series!
Posted by Elgin Subwaysurfer Bolling at 9:21 AM No comments: Links to this post