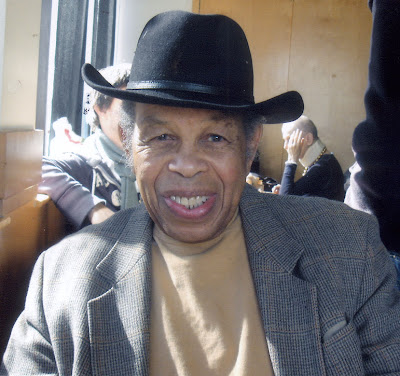 I came to the interview with high hopes of getting the ultimate secrets to becoming a successful illustrator. If George Ford could make it in the racially discriminatory period he did the bulk of his work, than surely I would have an easier time in the new millenium, I reasoned. George quickly took the wind out of my sales with the simple statement;
"You cannot DUPLICATE my success". He went on to explain the circumstances of his time, the people he met, the places he found himself were all contributing factors that couldnt possibly be duplicated because it was HIS LIFE. The mistake most young illustrators make is in THINKING there's a "duplicatable 10 point plan " for success.

"There isnt" He reasoned. "each artist must find his own way" Continuing on, he added that No art school is able to "give the plan" either. "You dont LEARN to be an artist, in ANY school," "art schools take the best people who are"good" (meaning they already have potential that serves as raw material) and the art teachers, if they are good ones, act as COACHES to guide a student in a direction, and help him develop his potential."

As Far as Potential goes, George had a lot of it. He was one of Three students who studied at Pratt Institute in the late forties, before continuing his education at highly competitive, Cooper Union. "There were 1000 people competiting for 90 spots in the school and I was the only black one." Not bad for a kid who attended Boys High School in Brooklyn.
Art was a challenging profession to make a living at to begin with, and being a Black man in the forties, attending art school made it a little tougther."the art teachers, knowing how tough the industry was, wondered how YOU were going to make a living", he added.
The social political climate of the day werent esactly the stuff "dreams were made of" for black youth, back in Georges' day either. The constant bombardment of negative black images, and stereotypes, ie. seeing blacks ONLY pictured as domestics, made you, "accept, on some level, a lower standard, based on what you're seeing. what you see becomes acceptable"
When asked how he WAS able to achieve his dreams inspite of the racism he encountered, he responded instantly that his Father gave him the confidence to continue. Unlike today, there was always an underlining push in the conciousness of a black person to "carry the hopes and apirations of the race with you" as you went about whatever you were involved in, including art. Since much of Ford's work involved illustrating prominent African Americans like Ray Charles, and Paul Roberson, I asked him did he feel it was neccessary to draw, quote, "black themes" "We need good men(in terms of technical ability) who have talent, to use it for the people." With so much art today being ego centered, such altruism seems almost laughable.But it is precisely this mindset that not only inspired Ford's work, but other black illustrators who drew during the same period, including the late Tom Feelings, a personal friend. I remarked how I had been inspired by Tom Feelings as a child when I, along with a group of other children had been drawn by him personally, at "THE MUSE" Children's Museum in Brooklyn New York. George Laughed as he recalled he'd probably "seen me" as he was drawing there also that same day! Small world eh?
Posted by Elgin Subwaysurfer Bolling at 6:27 PM No comments: Links to this post