this little piggy...on the Q53 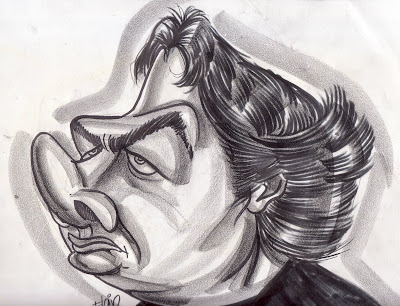 Couldnt quite put my finger on what animal this guy resembled while I was sketching him on the Q53 bus, then all of a sudden I started smelling bacon and thinking of BLT sandwiches....\\In an odd way he sorta resembles another one of my favorite caricature artists, Matt Zittman.
Posted by Elgin Subwaysurfer Bolling at 3:35 PM No comments: Links to this post 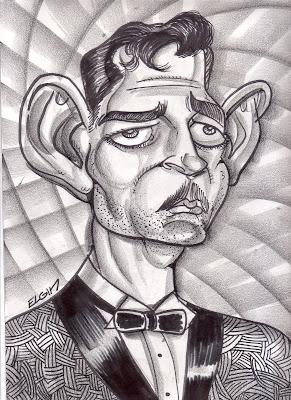 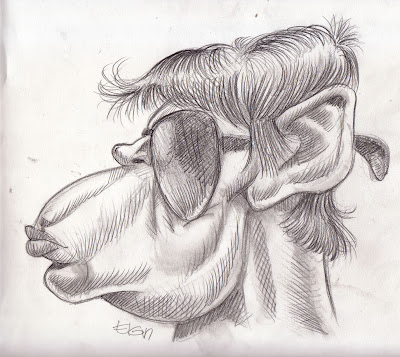 While channel surfing today I came across two films, Planet of the Apes, starring Mark Walberg, and "The Dancing Girl" starring Clak Gable. While watching the Gable film, I couldnt help but draw a caricature of him. One of the thinks I love about those old movies is that they give you LOTS of great extended closeups, and the fact that they're in black and white makes the face less distracting to draw. This was one of Clark Gable's earlier movies, and he is thinner and leaner. There was a scene where he was in the gym workign out with a medicine ball, and the guy was definitely "buff"
While watching Planet Of the Apes, I was reminded of one particular monkeyman I started drawing on the 33 Queens Bus. I took out the rough sketch, inspired by all the apes on TV and finished it with satisfying results. I dont believe in Evolution, but this guy sure looked like a Monkey's Uncle to me!
I also actually Liked The Planet of the Apes remake. I laughed out loud at the reversal of Charlton Heston's Line in the original movie. "Get your Stinking hands off me, you damn dirty Human!!!"
Posted by Elgin Subwaysurfer Bolling at 3:19 PM No comments: Links to this post