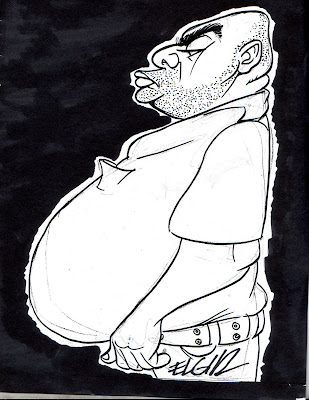 This Guy's belly needs it's own zip code... He probably adds it as a dependant on his taxes and counted it as an extra tenant on the census....Spotted him leaning on the A train subway car door bound for Manhattan. This guy was immense. About six ft five or something, and Most of hs weight was in that gut. Amazing how fat s distributed on some bodies...the rest of him looked kind of normal, proportion wise. This is one example of why I love doing my live drawing on the subway train, rather in a sterile studio environment. You'd never get a guy like this to pose in an art class.
Posted by Elgin Subwaysurfer Bolling at 6:41 AM No comments: Links to this post 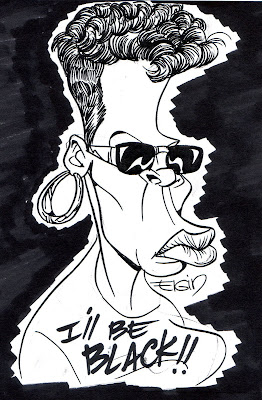 If she had a tag line, it would be "I'LL BE BLACK!!!"
Posted by Elgin Subwaysurfer Bolling at 6:39 AM No comments: Links to this post

Now WHERE did my Hubby GO??? Wife Loses husband on the B Train... 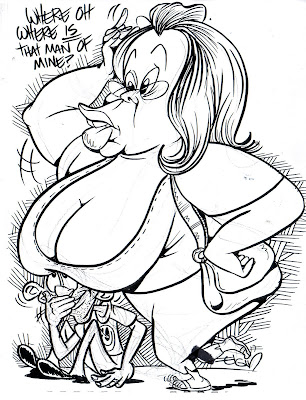 Okay... I KNOW that OPPOSITES attract... but there must have been something fundamentally off kilter in the universe that drew THESE two together.
She was a tall, amazonian, brick house blond, and he was a so diminutive in comparison that an Ipod to him would have been a laptop. They were obviously in love, and once again my mind began to free associate as I started drawing them on the train. SUDDENLY their KIDS came over to see what I was doing and began cracking up which alerted the husband who came over and started laughing too.

Now you think that with all this laughter and merriment that wifey would join in too....


Needless to say she wasnt pleased!!!

I sheepishly offered to GIVE them the caricature but wifey would have none of it. I did draw the kids though, much to their delight.

I could tell the husband really wanted the picture but wasnt about to argue with an amazon.
Posted by Elgin Subwaysurfer Bolling at 6:31 AM No comments: Links to this post 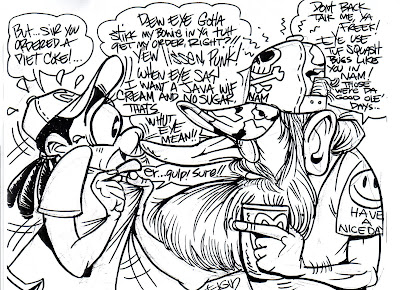 Gotta love McDonalds. You always see the most interesting characters coming in. I was near NYU this time and this old grizzly lookin' Viet Nam Vet dude shuffled in, and immediately my crazy cartoonist mind began to free associate as he made his order to the young counter person with the dreadlocks. This is what I came up with.
Posted by Elgin Subwaysurfer Bolling at 6:28 AM No comments: Links to this post