The word,"Caricature"to the lay person, brings to mind exaggerated theme park, street corner portraits with big noses, tiny bodies, and oversized heads. And while this is one style of caricature, the truth is that there are many different styles ranging from the realistic, to the abstract and iconic. It is the last two categories that I'd like to focus on in ths interview series. I've ad the privilege of associating with a special group of artists from around the world and nation who make up The ISCA( International Society of Caricature Artists) formally known as the NCN (National Caricatrists Network). Over the years I've noticed an elite "fringe" group within the organization, who seemed totally unconcerned with drawing so called conventional caricature, instead preferring to not only push the envelope of exaggeration, but rip the envelope to shreds and burn the pieces of paper! The result if their labors emerged a totally new exciting and highly personal way to draw caricature. In tge first interview of the series, meet Andy Urzua! 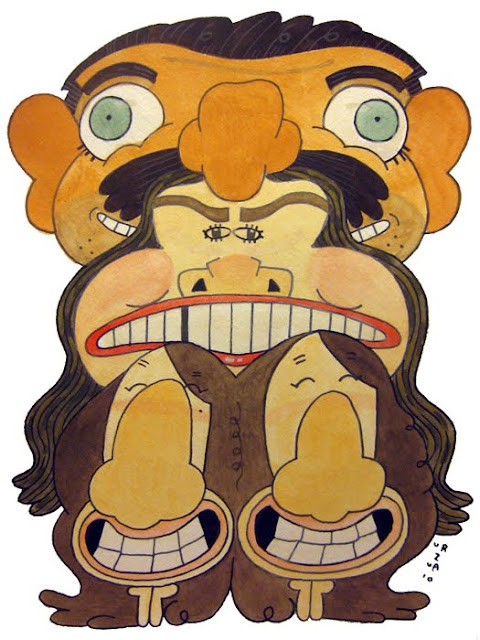 I REMEMBER WRITING, HOW YOU DRAW LIKE A LITTLE KID! NO DISRESPECT MEANT BY THAT! LOL what I meant is that its unrestrained and free. Have you always drawn this way? Well, I never used to draw this way?

In fact I never used to draw caricatures. I used to only draw little comic strips and a few drawings here and there with markers for friends of just random things. My last real job before being hired at Sea World through Kaman’s Art Supplies were I do caricatures was at Safeway/Vons where I was a baker. So I really had no connection to caricatures at all. It wasn’t till 2yrs at Vons when I met Gabriel Hunt he had told me about a try out for caricatures at Sea World for the SeaWorld/ San Diego zoo. So I submitted my portfolio of drawings. Went to the try outs and was quickly swept up by Beau Hufford who was the manger at that time for Sea World who told me that I would be great for Sea World and that the zoo was lame. True story. 7 mths in my job at Sea World I had learned so much I had never known about the human face and myself. After my first convention within my first 7mths in it had changed my view on caricature once again. This is when I started experimenting with my own cartoon strip style with live faces along with some other styles I had seen at this convention like my buddy Tomokazu Tabata from Tokyo, Japan. Since then my style has slowly improved, but I’m always learning new techniques.

TELL US A LITTLE ABOUT YOUR ARTISTIC BACKGROUND. WHATS YOUR DOSSIER?

I had only high school training in the arts really. I mean I only attended art classes as electives I used to always get C’s in class. I always wanted to do the projects my way. I wasn’t good at listening. But I also was in Journalism as the editorial cartoonist which I would draw everything from fillers to full on strips, I would also go on to compete for the school at state wide journalism competitions. I placed 4th usually locally, 13th state wide. After high school I had know plans for college, I never really had any sort of direction. I went with the flow. I had a caricature job once before when I was 18 but it only lasted a few months and I never really enjoyed it then. My head was somewhere else.

LIKE CHRIS CHUA, YOU ARE ONE OF THE BEST CARICATURE ARTISTS CURRENTLY UTILIZING WHAT I CALL THE CARICATURE CUBISM SLASH ABSTRACT EXPRESSIONISTIC EXAGGERATION APPROACH. DID YOU ALWAYS DRAW THIS WAY, OR DID IT JUST EVOLVE?

My style has totally evolved. It’s funny you mention Chris Chua, when I first saw his work during a pre NCN Reno Convention issue of Exaggerated Features I didn’t really like his style. I remember having conversations on his choices. My boss then told me I had to keep an open mind. But I did how ever like Tomokazu Tabatas style featured in the same issue. Which is the whole reason why I attended my first convention. As far as my style and where it originated from well it just came from everything I had accumulated through the years be it cartoons I watched, artist I admired or just the motivation from knowing I had the skills to create something completely different then someone else. I dunno really. Right now my favorite artist is Makoto Wada an older Japanses artist from japan. He doesn’t do caricatures anymore.But I came across a book of his through Tabata and it has helped me categorize myself as a minimalist caricaturist defining my child like style

OBVIOUSLY YOU HAVE TO BE "WIRED A CERTAIN WAY"TO EVEN GET A RECOGNIZABLE LIKENESS AT ALL USING THIS STYLE, WHICH YOU DO CONSISTENTLY, BY THE WAY, WHAT IS YOUR THINKING PROCESS?

Thank You. But it can be hard, and not all the time am I happy with my likenesses. When I draw live I sometimes wish I had more time since most of the time your decisions final. But I’ve had lots of practice to get it right most of the time. But when I work at home and have more time to work on a likeness of a celebrity or client/friend then my decisions can out easier for me, theres no pressure. But my process is usually looking at objects that reflect the design I have in mind and then exaggerating from that one idea. 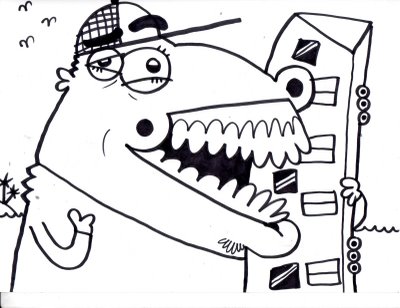 AWHOSE WORK DO YOU LIKE? WHOSE DO YOU HATE? WHY?
I have many artist I like most of them are my friends, I don’t have to many that I hate since that word for me seems to strong, I would have to care to much about one style to hate it. But there are times when I disagree with decisions an artist makes.


ANY INTERESTING STORIES INVOLVING YOUR WORK?
As far as this interview goes? I’ve gone on to win some awards from the now ISCA convention and have been able to travel around with my work. Drawing in another country is something I will cherish forever.


WHAT OTHER THINGS ARE YOU PURSUING WITH YOUR ART?
At the moment I’m taking it slow,I’m drawing mainly for some online competitions once and a while since I have a curious 17th month old son running around. But I have some plans on children books and other such illustrations not having to do directly with caricatures.


EVER HEAR OF THIS SUBWAYSURFER GUY? WHAT DO YOU THINK ABOUT HIM?
Yah, I’ve heard of him alright, this punk owes me money!


:
Posted by Elgin Subwaysurfer Bolling at 12:27 PM No comments: Links to this post


I got a chance to follow through on one of my New Years resolutions of experimenting with a new medium, Watercolor, in 2012. After working beside my collegue, Kenly Dillard, I always admired the beauty f his caricature paintings, nit to mention his audience response, whenever he added watercolor to his caricature. I vowed several times in 2011, that ud follow his lead, but never did. I decided to dive right in, a d started with a face that I thought was kinda fun, namely DJ Chuck of K Love radio. I don't know hw Chuck feels about the picture, but I love the results! I applied the same shading principles to the watercolor as I would to pencil, and the results were great! I feel very encouraged. Since I'm just getting used to this, I decided to severly limit my color choice and I think I will stick to monochromatic for a while.
Posted by Elgin Subwaysurfer Bolling at 9:59 AM No comments: Links to this post