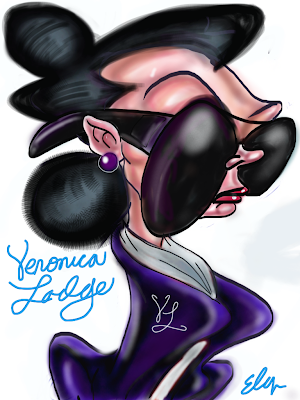 Almost forget that I had left out a MAJOR character from my Riverdale series and that was VERONICA LODGE. What's different about this particular cartoon rendition, is that it is taken from real life, of a New York City Subway commuter I drew last week. There she was, looking cold , aloof rich... My version of Veronica Lodge, Riverdales Rich girl. Veronica is Riverdales "BAD GIRL" or at least she WOULD be if the creators took her as far as her personality profile REALLY goes. VERONICA, as stated earlier, is REGGIE MANTLE'S soulmate. His evil twin, his true match. The comic tries real hard to make her endearing, but with just a casual reading she's like any other rich female brat that has populated the soap operas for years Rich, self centered, greedy and spoiled. Veronica is Veronica's number one fan with two loves, herself and high fashion, not to mention money... okay, that's THREE loves.

Posted by Elgin Subwaysurfer Bolling at 5:36 PM No comments: