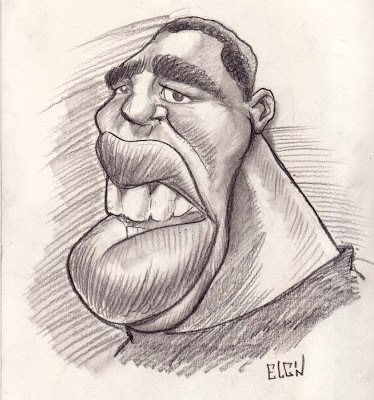 Ive been LITERALLY drawing my son , Gerard before he was born. (as wierd as it sounds I actually drew a picture of EXACTLY what he looked like as a little kid while my wife was pregnant!) Gerard has one of those faces that artists love to draw full of expression and power. He's tall dark and handsome, everything Im not! (which is why its such a joy to mess up his face!!! heh, heh!)He left today to go on a college visit and I was missing him and decided to try my hand at a memory sketch. Roddie personally hates how I depict him in caricature, but hey! Im STILL his father , even though he towers over me....
Posted by Elgin Subwaysurfer Bolling at 3:16 PM No comments: Links to this post 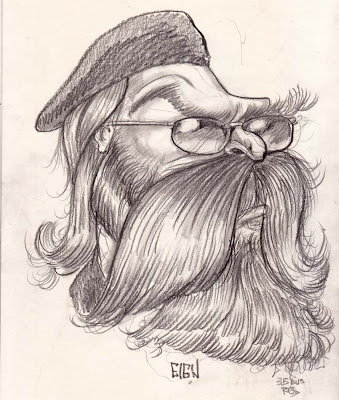 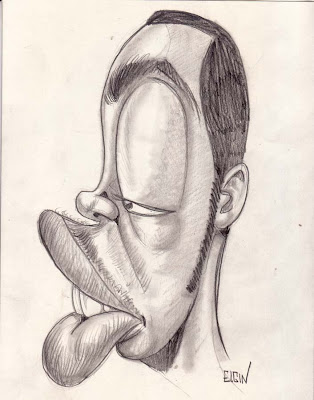 The dude with the glasses is a local neighborhood residnt, named Ray who looked over my shoulder while I was at the bus stop today drawing my picture of my son, Gerard, feature above. I recognized Ray's face from 3 years before when I drew him one summer and commented on what a character he was! He laughed, and talked for the next half hour about cartooning and animation, two interests he had. I promised ray that I would draw another picture of him, featured here, of course, and that I would track down the original one and give it to him.

While trading in my cell phone at the Sprint store, one of the workers walked in from his break and had the most interesting expression, I captured hi immediately and worked on it on my train ride into the city.
Im starting to use a blending stomp with my pencil work now and liking the nice "airbrushy" effect it has. What a satisfying tool, pencil is!
Posted by Elgin Subwaysurfer Bolling at 3:10 PM No comments: Links to this post