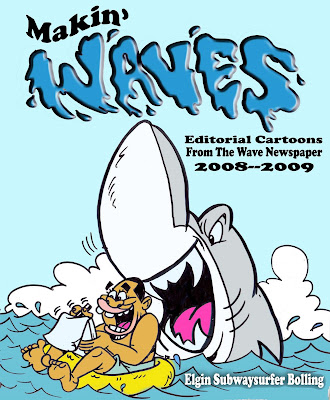 ANOTHER comic con has come and gone, and yours truely, The Subwaysurfer, did NOT get his minicomics printed up in time to attend.... Sigh.... Not that i COULD have gone anyway, since i had a caricature job to do in Edison that day, but it's the PRINCIPLE of the thing darn it!!!
Making comics has become a sort of "hobby" of mine, especially since my accident last year that kept me homebound. Im happy to say that I am doing MUCH better, can walk without the aid of a cane, and dont need to carry around a chair anymore, AND Ieven dropped a ton of weight that was aggravating my condition! Even though Im up and about more, the love of making comics has grown stronger, but procrastination still seems to be an enemy . The only way to slay the procrastination devil is to meet it head on with hard work, and thats what I did.
It was then that I realized that one project was already done, and right under my nose, namely, the ongoing editorial comics I'd been drawing for The Wave Newspaper for the past year now. The Wave Newspaper, incidently, was awarded the much coveted, BEST OF TH BEST status by The Village Voice recently, and Id like to think that my cartoons helped to contribute to the papers success.
To continue, though... Ive compiled a couple of my best editorial toons from 2008-2009 and have decided to put them into a mini comic that will be on sale for the next comic con that comes around. I even came up with this snazzy cover today that i drew while subwaysurfing on public transportation. Comc Comic Con time I will be ready with at least four books that I am in the process of making, one of which that is so hush hush, I wont even TALK about it! be watching here for news!

Check out my comics blog at
www.extremelifedrawing.blogspot.com

For upcoming comics, and works in progress.
Posted by Elgin Subwaysurfer Bolling at 2:07 PM No comments: Links to this post