This is the first in a series of past Wave Newspaoer cartoons where I, the editorial artist, look back to re examine and re evaluate my depiction of African American people and politicians that have populated the pages of the publication for the last three years I've been on board. It is my intention to demonstrate that outside of interpreting the editorial copy given to me, I have no personal racist agenda which has been suggested by Congressman Meeks as the result of an unfavorable caricature of him and Senator Malcolm Smith.

The Wave reports frequently on both elected officials, so I get a chance to draw them frequently, as I do other elected officials as seen in the caricature below. While I did go for comical effect on Senator Smith(what can I say, he's just so much fun to draw!) I would have to say, with the exception of Gov Patterson, depicted as "Charlie Brown" everyone else, looks rather dashing! Even heroic by my visual interpretation.yes, the lips are prominent in all these men, as full lis are an African American trait, but there's no sign of explicit race bating parody in any of the drawings. I understand that audience reaction may vary, and I have no control of that. 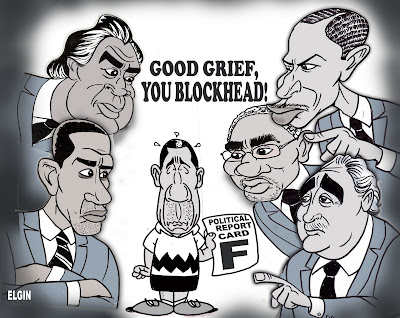 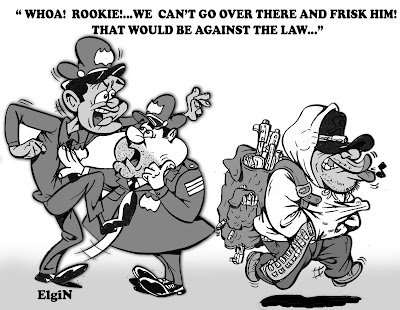 The picture with the cops and the gunman feature two African Americans in staring roles. In my toons I've always made a point to introduce black characters in key roles, something Caucasian artists generally don't think about. Notice in this cartoon it's the AFRICAN AMERICAN officer who wants justice to be done to stop the criminal, and is restrained by his white partner. Clearly, in this toon the back cop can be seen as a heroic figure, even with the presence of the Black criminal. It can be argued, "why did you make the BLACK guy the criminal, in this drawing?" my answer would be, "WHY NOT?" in the effort to uphold Bkack pride, some of my people, and I've done this too, in the past, want to hold up the entire race as paragons of virtue, who never do anything wrong. Such a view is untrainable, and insulting. Some people who are Back, DO commit crimes. Just as some, thankfully more DO NOT. THAAT is what is being depicted here.
Posted by Elgin Subwaysurfer Bolling at 7:17 AM No comments: Links to this post