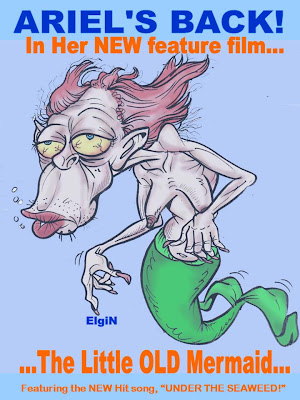 Here's an "artists Nude you're not likely to see anywhere...'

I remember watching this OLD "Bettie Davis" movie, "What ever happened to Baby Jane?" It's a hilarious dark drama comedy ( IMO) Starting Bettie Davis and Joan Crawford. Davis, is the aforementioned, "Baby Jane" a former child star whose star has long since faded along with her sanity. Davi literally terrorizes Crawford in the film, and it has some frighteningly hilarious moments. I began to think, what if DISNEY cartoon "child star" characters made "movie combacks" Even the more drop dead gorgeous stars look like they're about TO "drop Dead"when they get older, so little "Ariel" should be no exception! This pic was drawn originally in response to a "DRAW A MERMAID" topic that was posted on the weekly drawing site, "ART JUMBLE" As you might expect, everyone was drawing these sexy gorgeous mermaids, but being the MAD cartoonist that I am, my twisted mind had other ideas. In addition to Old Ariel, I also drew her gay Merman cousin, who wants to be a "little mermaid" and also another Ariel picture when she let herself "go" I will upload those later. I encourage artists to check out ART JUMBLE. Its a great site that will definitely FIRE UP your idea engine when you just dont know what to draw. I certainly wouldnt have thought to draw THIS on my own without their posting the topic.
Posted by Elgin Subwaysurfer Bolling at 12:43 PM No comments: Links to this post

There's an old New Yawk City saying that goes, " Dont let your MOUTH write a check, that your "ADDRESS" cant cash..." At least they used to say that where I'm From. Here's a classic case of that scenario with Cabbie vs Pedi cab driver. If you notice, the pedicab driver is the initial aggressor. He's throwing the coffee cup, and even hops off his bike and pushed the cab driver through the open window. Clearly by his actions, body language, and attitude, the Pedi cab driver thinks he's going to "own" the cabbie in a fist fight. Like most of New Yawk city's little ironies, the opposite happens. Notice how the cabbie, in CLASSIC "UFC" like fashion, evades the pedicab drivers initial strike, and does one of the SWEETEST wrestling leg takedowns, that you are used to seeing on TV, but not in real life! LOL! Notice how the cabbie immediately establishes dominance in the mount position and is about to administer some SERIOUS "street justice" before a courageous pair of gutsy good samaritan pedestrians break up the scrap.

Just goes to show you that you NEVER know who youre messing with. Do yourself a favor, and keep your mouth SHUT.

I sure learned MY lesson to not get NYC Cabbies upset a few years ago. I was having a severe asthma attack and called a cab to be driven to a clinic. The driver, showed up a little drunk, I could smell it in the car, and drove like a maniac. I was so angry and frazzled by the ride that I demanded rather strongly that he stop and let me out. We were several blocks from my destination, but angry and frustrated I decided I had enough. He turned around and demanded his money, and i got angryly out of the car and threw the money in the front seat slamming the door hard. I started walkking with halting steps, breathing heavy towards the clinic.

That's when I heard the door open and sounds of cursing in spanish.
I kept walking.
I heard the trunk of the cab opening
I kept walking.
I heard the sound of a chain being pulled out of the trunk.
I turned around.
To my horror, he had one of those BIG chains you see them tie boats to a dock with. He began wrapping the long chain around his wrist/arm for support, slammed the trunk and began running at me swinging the chain over his head, like a barbarian out of a conan movie.
Remember, I was having a ASTHMA ATTACK
I couldnt breathe
I could hardly walk
But when I saw this guy coming at me swinging this chain above his head
I kid you not, I literally ran FIVE BLOCKS on my tippie toes, so fast that i didnt even REALIZE I was running!
I left him in the dust and darted into a building that had a doorman.
I fell on the floor to the horror of two tenants in the building and pleaded with the doorman to call 911, I was having a major attack now and this maniac was after me
The doorman literally bent down, grabbed me by the back of my collar, and the back of my pants, and THREW ME OUT ON THE STREET COMIC BOOK STYLE!
I staggered the remaining few blocks to the clinic, and collapsed on the desk. Needless to say I was given immediate care.

Now all of this trouble could've been avoided if I'd JUST KEPT MY MOUTH SHUT!

But I had to learn a lesson
just like this Pedi Cab Driver did.

I think his was a little more painful though.

SORRY FOLKS ABOUT THE FILM NOT BEING AVAILABLE. DUE TO SO CALLED COPYRIGHT ISSUES, THE FILM HAS BEEN TAKEN DOWN... WHAT PROBABLY HAPPENS IS THAT THE TAXI COMMISSION FELT THIS WAS BAD PRESS FOR THEM, AND ALSO WHO EVER IS IN CHARGE OF PEDI CABS AS WELL, AND THESE TWO GOT TOGETHER, COMPLAINED TO SOMEONE, AND GOT IT PULLED. THIS IS A SHAME BECAUSE THE FILM IS REAAAALY A MUST SEE.
Posted by Elgin Subwaysurfer Bolling at 9:20 AM No comments: Links to this post