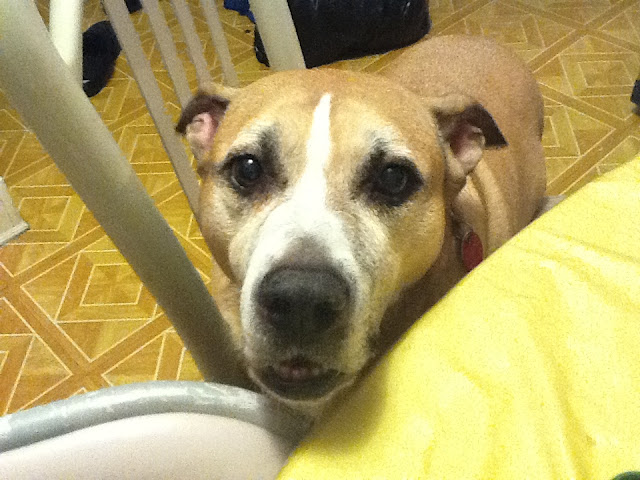 A friend is one who is always happy to see you come and sad to see you go.

It's been a full week now, and I still find it so hard to let go of my best friend, my Beloved "Staffie" Butchie Dog.

He was fourteen years old.

"Beloved" is one of those words that you don't hear spoken much. It's most often written and read. It's like a sacred word, reserved only for those souls that touch our lives so deeply that their love for us, and ours for  them transcend words.

As I've  said numerous times in this Blog, being an artist can be a lonely life sometimes. Unlike regular nine  to fivers, there's no daily morning commute, no ganging around the water cooler with your co withers, no confrontations with your boss... It's just you alone in an empty studio, with a sheet of paper, a computer screen, and the radio with the volume turned up for company.

To break up the monotony you can go out on location, see clients, or even have an occasional friend stop by, but the sat majority of time, it's just you a d the sound of silence. 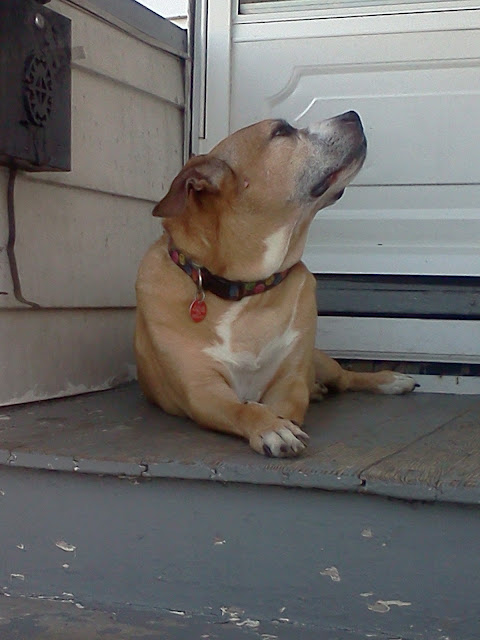 For me, Butchie Dog filled up that silence. As I bent over my computer screen today banging out another late assignment, I found my eyes becoming wet with tears as I started to miss that old familiar sound of him coming down the stairs, and finally aging at my feet like a dog skin rug. I can still feel his cold, wet dog nudging  my my ankle, reminding me that it was time for his morning walk. I would complain to him on cue, about needing to get my work done, but always felt more refreshed having gotten fresh air from our morning romps. I always took special pleasure in feeding him, because he had this curious way of "thanking me"  for his food. He would always tae a few bites, then stop cold, pause ad turn in my direction making eye contact for a couple of seconds before returning to his meal. That's way too much thinking, for a dog"I used to say to myself, but Butchie Dog apparently did a lot of thinking!

I recall  the first couple if months wen we got him, and tried to put him in a cage when we keft home. Wed come back hours later and found him on the coach fast asleep. I was always reprimanded for leaving the latch unlocked, until one day I returned home unexpectedly a few minutes after leaving, to find him slipping out the cage, by squeezing his body through an impossibly narrow opening until the match was released.

After that incident,he was awarded his freedom and had full run of the house!

One time we wished we hadn't done that. As he got older, he began to suffer from serration anxiety, and couldn't be left alone. I left the house one morning and returned to find the plaster near the front doing literally eaten away, exposing wiring and  wood underneath,  a bathroom door knob crushed like aluminum foil, and numerous shredding of door frames.

It officially became my job. To stay with Butchie Dog after that (which I was doing anyway) and the only time I could leave for  appointments,  was by meaning him with  a boarding service at the local pet shop for days ad weekends.

Did I mention how he single handedly escaped not only from his cage one night, and also set free EVERY OTHER DOG IN THE PET SHOP TOO???

The owner found it so hilarious that he never even penalized us.

I'll always miss the fact that he'd  be here to comfort me when I was sick. Especially when i got so sick I'd be in bed for hours and hours, never complaining to go to the barroom, never demanding to be fed.

He'd just wait for me to Be Better  and we both would take it from there.

When i noticed the timings growing on his body i tried to ignore it. When I noticed him becoming winded after our walks, I pretended not to notice. wen I would see him stumble walking down a flight of  stairs, or whimper on the couch in pain, I'd pretend not to hear.

But that day at the vet one week ago, I could no linger deny it.

My friend was dying. Bit by bit. Slowly and painfully.

I had to let him go, and because I knew that this was the last time I would see him, I couldn't bear to even look in those eyes again.

I didn't want that memory.

I wanted the memory of long walks in the summer. Of digging paths for him to walk in the winter snow, of watching him endure having reindeer horns put on him on Christmas Eve, of listening to him snore at my feet while I drew, and  of him slowly, painfully purposefully climbing the stairs that lead to my bedroom just because he couldn't bear not to be near me.

And that's what I'm going to miss the most.

And I'll miss you every day., 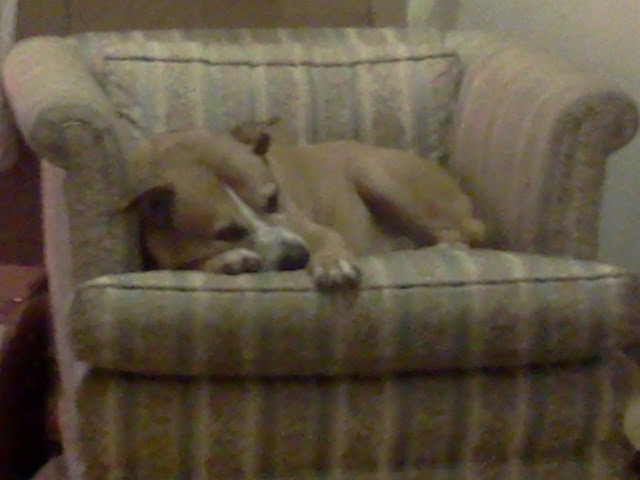 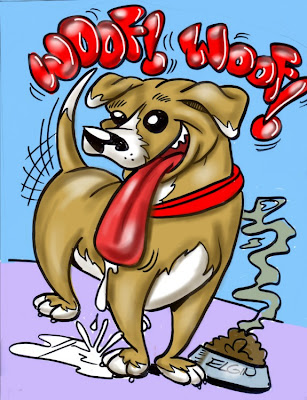 Well maybe it's not going to the "DOGS" but at least ONE dog, anyway. My dog, Butchie. Butchie is my 13 year old American Staffie aka a Pitbull Deluxe. Butchie dog, as I call him, has been my constant companion for years as I sit in this lonely basement studio that is either too hot, too damp, or too cold, as I crank out caricatures, create cartoons, communicate with clients , or cry continuously because of cranky customers! LOL. It occurred to me that Ive never really drawn the one who is truly, "mans best friend" ... shhhh is my wife listening?....One day, after coming home
from a vet visit, he came into the living room, and was so happy to see his dinner waitiong, that he wagged his tail stuck out his tongue and held this pose for a couple of seconds, long enough for me to get just the gesture drawing I needed to make this great Doggie Caricature
Posted by Elgin Subwaysurfer Bolling at 11:54 AM 4 comments: Links to this post