Base Guitarists On The L Train 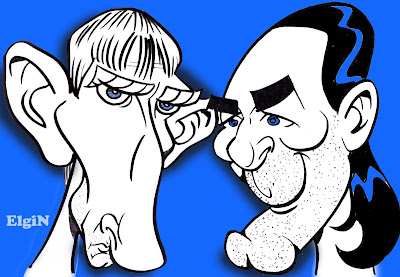 Was riding the L Train from 14th Street to 8th ave, and overheard these two musicians talking to each other....."man, I gave the dude some money! he was good!..." said one of them, as he was commenting on a subway musician he'd just heard. ".....not me ...." said the other, ".....wouldnt even shake his hand, it's a Bad Omen!" I couldnt resist lookin at the face of someone who said something so outrageous, and started drawin him. He noticed me drawin him and then HE took out a sheet of paper and started drawing me! I took it in stride and when I completed my sketch showed it to him and gave it to him. I liked the fact that his face had this sullen intense look which reminded me of Steve McQueen. He had a great sense of humour though, in spite of his intense look and he laughed and handed me his drawing. His fellow base player felt left out and made a subtle request to have his picture done also. He spoke with a southern drawl and when i looked at him he kinda reminded me of actor, Tommy Lee Jones. He had that Kind of vibe. Visually he had features like his bud, that were "made" for caricatue. Slicked back hair, intense blue eyes, cheekbones that looked like handballs when he grinned, and that classic "BUTT CHIN" we caricaturists love to make fun of. I handed him the picture and he loved it. As they got off I very quickly made copies for myself that Im posting here. I really wish these guys luck as musicians, they definitely have a signiture look that should carry them places.
Posted by Elgin Subwaysurfer Bolling at 10:26 AM 2 comments: Links to this post

Been wanting to feature Sam klemke for a long time of this blog. Sam is the eptome of what a caricature artist is. He makes his living purely as a caricature artist, travels around the country from state to state where ever there is a fair, a party, a Bar Bat Mitzvah, or even the Opening of an envelope, Sam is there drawing caricatures and smoozin the crowd.

Sam is first off VERY good. SCAREY GOOD in fact. When I first got into the caricature biz many moons ago, I discovered Sam's work in the NCN's Trade Magazine, "EXAGGERATED FEATURES" where he was the comic artist who did hilarious, sometimes thought provoking comics on NCN Convention events, as well as his wacky adventures as a traveling caricature artist. Within the pages of his comics Sam would sometimes get philosophical about what it means to him to be an artist, the trials and tribulations of our profession and even the potential dangers! There's one cartoon where he writes about the time he was mugged in his Van which is hilarious. Thank God He survived or we would have lost a great artist.Sam's depictions of the various caricature artists of the NCN, now known as the ISCA, International Society of Caricature Artists, are always spot on accurate. If he had the inclination and opportunity,Sam could easily be a MAD Magazine cartoonist.
In addition to being a great draftsman, which would be scarey enough, Sam is also a born entertainer. Ive met few people who can out talk and out smooze me into complete silence, but Sam is a master at hitting all the right notes verbally, and can literally drown you in a barrage of verbage, making you laugh yourself to death as youre going under.
Sam's caricature adventures can be found in his book, A PARTY OF ONE which he sells on his website. I personally had him sign my copy at a convention and he had did one better and drew a caricature of me on the back with a SHARPIE!!

Sam is also a film maker and has more hilarious stuff on youtube that you can find by following this youtube link if you double click on the film Ive posted.

I definitely count Sam as one of my inspirations for wanting to do autobiographical comics, and Im sure anyone else who views his stuff will be equally inspired.

Now that Ive done enough brown nosing, I think I'll go and wash my face... the smell is beginning to get to me....
Posted by Elgin Subwaysurfer Bolling at 9:58 AM No comments: Links to this post