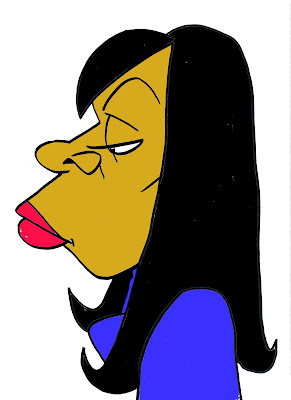 As Ive stated so many times before in this blog, the one thing I love about subwaysurfing aka extreme life drawing, are those times when i can totally capture a mood uncut and unfiltered and put it on paper. You really dont get to do that when people are busy performing preening and posing as they do in a party situation or in a life drawing class. This young woman, caught riding the subway, looked "normal " enough and I started ovserving her sensing that something else was "coming". Then for a couple of minutes her face changed, and she had this look that i captured here of sadness, anger, and dissapointment. It was a very private moment, but there it was on her face. My heart went out to her as I have seen this "look" on the face of so many young woman her age in this day we live in. I dont know what was on her mind, but as quickly as the expression appeared, it vanished as she became aware of me.
Of course, as always, by the time my subject becomes aware of me, they've already been captured. The challenge in doing a piece like this is to draw it quickly, and economically. Ive studied Jeremy Townsend's approach to doing caricatures and he is a master at this, which is why I admire his work so much. I tried to get that same economy of line here. The original pic was drawn in pencil, inked with a tombo, colored in photoshop uploaded to the blog and is being viewed by you. Aint technology great?
Posted by Elgin Subwaysurfer Bolling at 9:32 AM No comments: Links to this post