Aussie was glad to be in New Yawk! 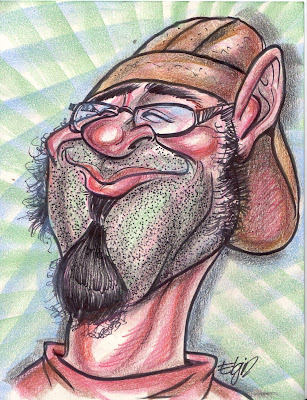 He got on with his wife and kid at Howard Beach Station on November 21st. the day that I wuz subwaysurfing with my pals from the NCN. We had just said goodbye to Paul Moyse as we dropped him off at The JFK Airtrain at Howard Beach, when I saw this guy get on. At first i wanted to draw his wife, but she immediately diverted my attention to him, and I was glad she did because he was sooooo interesting to draw! He was an Aussie who by his own admition was glad to be in New Yawk. I gave him the first two caricatures I did of him and kept the best one for myself. You can see the pre draw of this in a previous post on the 21 of November.

He had a reaaaaaallly rough face with a LOTTTTAAAA Razor stubble! his face was so rough you could easily strike a match on it!
Posted by Elgin Subwaysurfer Bolling at 7:48 PM No comments: Links to this post 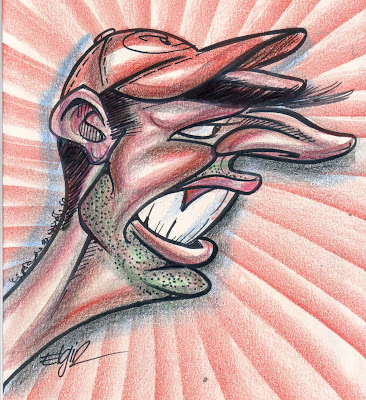 He looked like a Junior High School gym teacher without a whistle. Any minute I was expecting him to yell out, "DROP AND GIVE ME TWENTY!!" He was ticked off about sumthin. maybe someone put ben gay in his jockstrap...
Posted by Elgin Subwaysurfer Bolling at 7:44 PM 2 comments: Links to this post 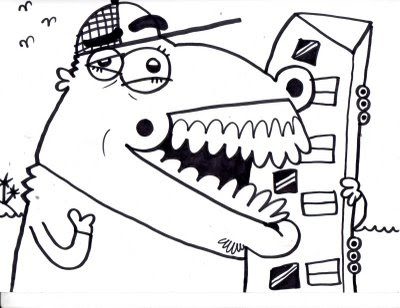 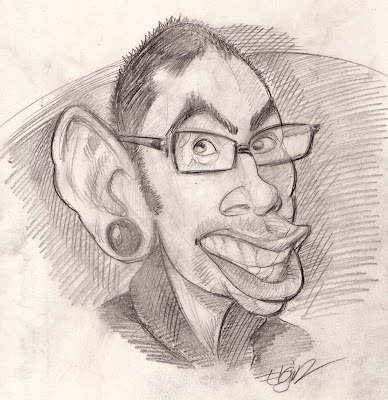 Andy is a dynamite San Diego caricature abstract expressionist, who recently won best party style and cartoon caricature style at the recent NCN convention. This is my take on him.
Besides I OWED him for jacking MY Face up!!
Posted by Elgin Subwaysurfer Bolling at 4:13 PM 1 comment: Links to this post