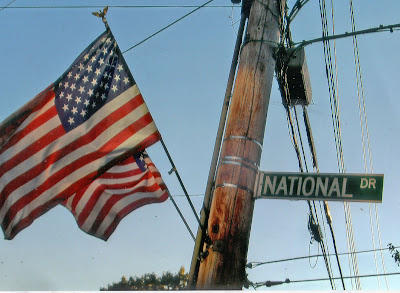 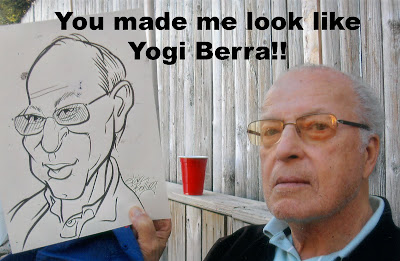 Did a Labor day gig on a street called "NATIONAL DRIVE" in Brooklyn. What could be MORE "Labor Day ish" than doing a gig on "NATIONAL DRIVE?" Much thanks to my gracious host for hiring me for his annual party. I always look forward to coming to his home to draw and entertain his guests. The great thing about his party is that since he's a repeat client I get the opportunity to draw a lot of the same kids year after year and see how they've grown and how my art style had improved.

This is a pic of one of the "bigger kids" , not the host, who posed for a picture. He kept claiming that I made him look like the old skool baseball catcher, "YOGI BERRA"... even though Yogi hads thicker darker eyebrows..darker hair..... tanner complexion.... and is stockier.... it's really amazing the perceptions that people have visually of themselves! His buddies at the party "corrected him"
Posted by Elgin Subwaysurfer Bolling at 9:03 AM No comments: Links to this post

It warms my heart that people in other parts of the world are actually using the medium of COMICS to DO MORE than just make "funny pictures" "soft porn" or "autobiographical egotistical meanderings " as we do so often here in the states where we're either looking to "get paid" or get a photo op. People in Asia, Africa and parts of Europe are using this to make statements, call attention to social and political issues and to give grassroots people a voice to build community. As a political editorial artist myself I see the power in this and definitely want to be a part of it... heck, I AM a part of it already. I need to play a BIGGER PART.
Posted by Elgin Subwaysurfer Bolling at 8:27 AM No comments: Links to this post