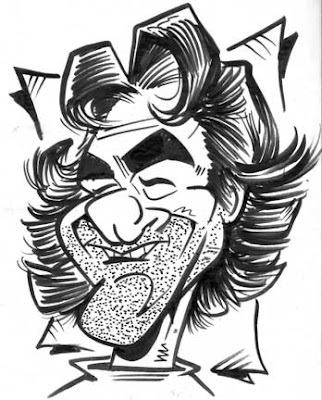 I know Im a day early, Kurt Russell's Bday is actually TOMMORROW March 17th, but I was so pleased with the sketch i did for Jan Obdebeek's "Birthday People" thread on the NCN forum that I wanted to post it here.
How could any self respecting New Yorker NOT love Kurt Russell? in John Carpenter's 1981 Cult Classic, "Escape From New York", his portrayal of bad to the bone, anti-hero, Jake Plissken, is one of cinemas immortal characters, right up there with "Dirty Harry""Han Solo", and "Cool Hand luke"
I drew this quickly using a thick crayola marker done in my "party style" total time on it took 3 minutes. Russell has one of those great faces that lends itself well to this technique, and had enough defineable features to make him an "easy draw" for any competent caricature artist.
Posted by Elgin Subwaysurfer Bolling at 11:23 AM 2 comments: Links to this post