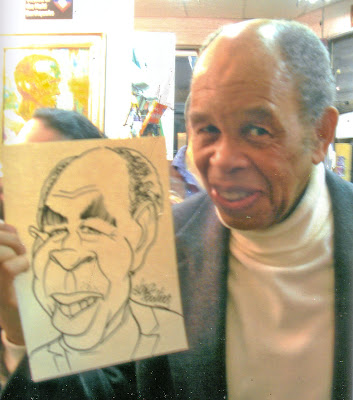 "Man, you ARE the real deal!" said Illustrator, George Ford, as he caught me re drawing a caricature I'd done of him at the Z Space Art Gallery two weeks prior. I explained to him that how I was never satisfied with my work and wanted to redraw it and present it to him as a gift, and post it on the blog. The truth of the matter is that I guess I wanted to impress him as much as he had already impressed me.
There's a lot to be impressed about... George Ford has illustrated over thirty books in his career, most notably the book, RAY CHARLES , written by Sharon Bell Mathis. and illustrated by George Ford. The book went on to win the 1974 Coretta Scott King Author and Illustrator Award,marking the FIRST time an ILLUSTRATOR had recieved the award. After that initial meeting with him at The Z Space I requested another meeting with him at a later date to discuss his career. This being Black History month I thought it important to focus on African American Artists whose work and accomplishments had caught my attention. Mr. Ford Gratiously consented and took three hours out of his time to discuss with me his approach to illustration, his career as an artist, how politica and social climate contribute to an artist's work, and even, Lil' Wanye! LOL!! I'll write up in subsequent blog posts what we talked about. SOME THINGS Not ALL!!!! He told me a few secrets that I AINT SHARING!!! LOL! Stay tuned!


In the meantime, here are a few links that lead to his work
http://www.justusbooks.com/modules/content/index.php?id=70

http://www.infibeam.com/Books/search?author=George%20Ford
Posted by Elgin Subwaysurfer Bolling at 7:57 PM 2 comments: Links to this post