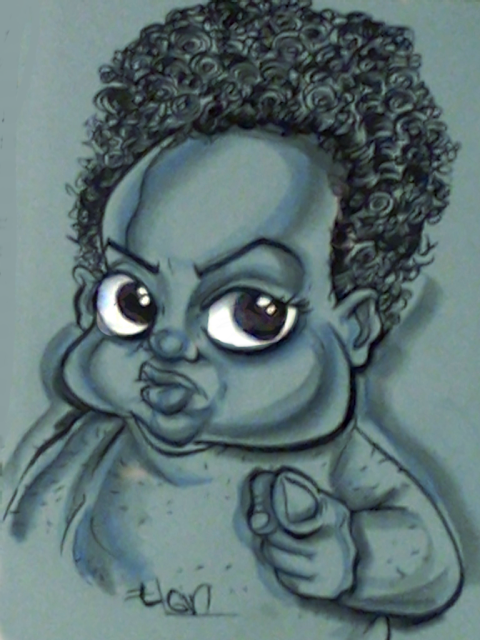 Folks when I say this baby had large eyes, I mean they were like tennis balls! This kid was a newborn who a mother wanted to have drawn at a recent party at The State Building on 125th street. The baby was sleeping initially, and I asked his mom to take off his winter hat and scarf and just hold him up so I could see him better. I could see that even though a newborn he already had an impressive head of ink black shiney curly hair that would have made any woman jealous. Then....he suddenly opened his eyes, and I'm not kidding, I nearly yelled in surprise when he fixed those peepers on me. They were unusually large for a child his size, they were expressive, intense, and almost seemed like automobile headlights! The whites of his eyes in contrast to his chocolate complextion made his eyes appear luminous. I immediately drew a memory sketch of the kid which you're looking at niw. I don't know what he will be when he grows up, but if he's an attorney, you're going find it hard to lie to him!
Posted by Elgin Subwaysurfer Bolling at 1:21 PM No comments: 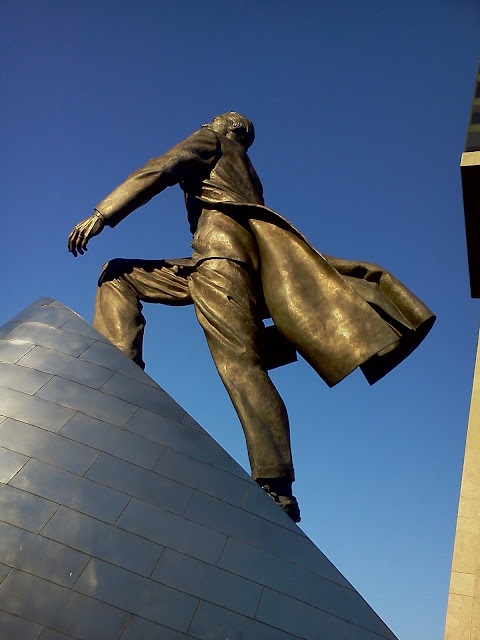 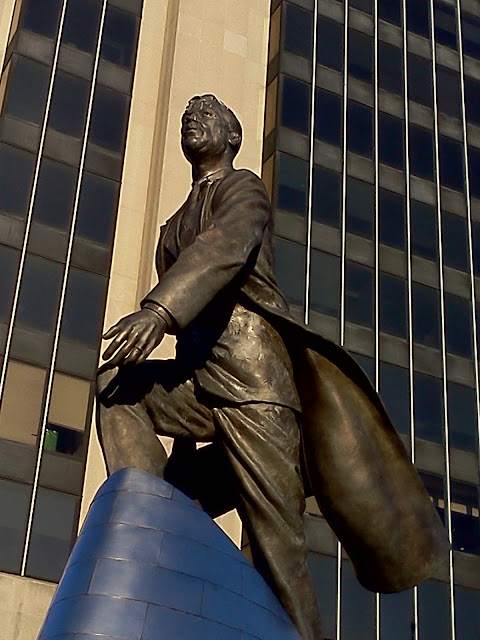 I recently did a gig that was held at The State Building om West 125th street, spitting g distance from the world famous Apollo theatre in Harlem NY. At te entrance of the building s this magnificent, jaw dropping statue of Adam Cayton Powell JR. For those of you shoring know who he was,Adam Clayton Powell Jr. was best known in his role as chairman of the House Committee on Education and Labor. He was a leading figure in passage of the backbone of the much of the social legislation of the Kennedy and Johnson presidencies.

He helped steer the passage of the minimum wage bill, the Manpower Development and Training Act, the antipoverty bill, and bills providing federal money for student loans and for public libraries.

The above quote was taken from this site:http://cityroom.blogs.nytimes.com/2008/11/28/remembering-adam-clayton-powell-jr/

What I love about the statue is that it's depicts Powell the way I AKWAYS read him. Powerful, persistent, insistent. And progressive. He was the proverbial "man in motion" an articulate, informed, furry spokesman for Afrjcan American people during one of histories most tumultuous racial periods. The staue as I mentioned earlier is absolutely heroic. Powell appears to be able to walk off the podium into heaven itself, jus trench coat blowing behind him in a way that reminiscent of Supermans cape in flight.
Posted by Elgin Subwaysurfer Bolling at 12:55 PM No comments: