The first post was so popular, I decided to include this second one in the series. Sorry about the view. I got disorinted on this camera. Hope its  not too much of a distraction.
Posted by Elgin Subwaysurfer Bolling at 2:57 PM No comments: Links to this post 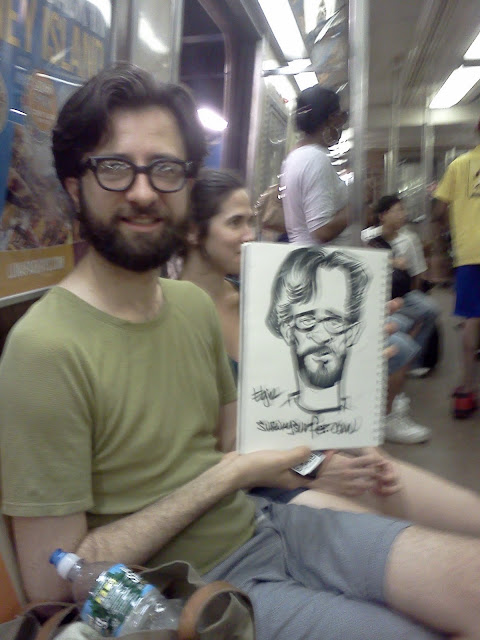 I absolutely LOVE it when passengers are bold enough to ASK for their picture, like this gentlemen did  here. I was sitting across from him and noticed he had an interesting look for a character design I was developing of a scientist, or something like that. I did a quick sketch and turned the page when he inquired about thedrawing. we went on to have a great discussion about social media, character design, and entrepreneurship. He even gave me some social media tips! what did he tell me? HEY! that's MY secret!   Sorry for the shaky picture I was on a moving train and took this with my camera phone. The guy in the picture  name is WES. I told Wes I would be doing some character studies on his face, much to his delight,....
Posted by Elgin Subwaysurfer Bolling at 3:33 PM No comments: Links to this post


Have you ever found yourself horrified frustrated and frozen with fear someone with braids approached you to be drawn at a life event? I sure did! I hated drawing braids so much that I carried scissors in my bag with intentions on cutting them off the persons head! since being a barber is not in my skill set, I had to devise a method for drawing them quickly and easily. Nothing can ruin a caricature more than drawing braids sloppy, especially if its a major part of the persons, visual persona... er... is that even a word? This video goes into one of my methods that not only make drawing braids easy, but also a lot of fun! forgive the quality of the video, I filmed it on my smartphone while waiting for my wife while she shopped at Trader Joes....
Posted by Elgin Subwaysurfer Bolling at 3:11 PM 2 comments: Links to this post 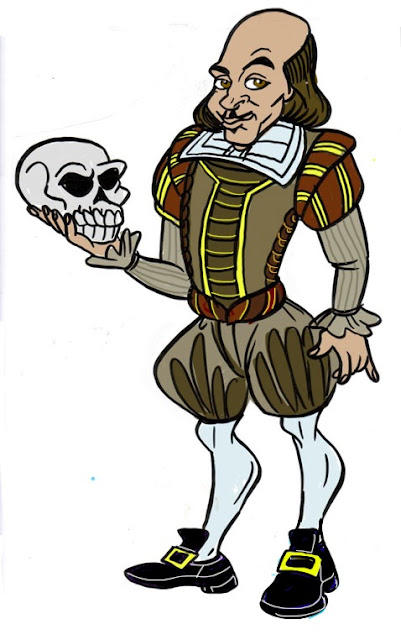 Talk about a different and unexpected assignment.... I'm currently working with a client who commissioned me to draw some character designs for a board game he is currently developing, and one of the characters is William Shakesphere. I must admit, I've never had a request to draw that before, and was very excited on how I would interpret the character.

The client wanted the illustration to be a full body shot, no gross exaggeration, and recognizable. I immediately thought of the style and approach that Alex Toth used when he was commissioned to draw characters for Saturday morning toons back in the day. The design had to be elegant and simple. As has become my habit, these days, I drew the character in such a way that if it were being animated, it could be easily copied, and quickly reproduced. I looked at pictures online to see how Shaesphere had been depicted by other artists, and then gave it my own particular flair, as I did with the period clothing, after researching that. Google and YouTube make research like this a snap.

I couldn't resist adding the skull as a accessory, and within a few hours, I had a character design but artist, and client could be proud of.

What I love about assignments like these, is the opportunity to draw people and things I wouldn't ordinarily draw myself. Another great benefit if drawing William Shakesphere, is the potential of bring new viewers to my blog who come, not necessarily because they like art, per se, but because they like William Shakesphere. Hopefully in the process of viewing this illustration, they will be encouraged to check out the rest of the blog.

If you want to increase traffic to your blogs start including pop culture pieces, as well as "traditional" drawings like Will, here. The goal is to get new people looking at your work, and if you're selling something, hopefully, they will be impressed and encouraged to buy something.

Speaking of buying... It's time for another...

If you are impressed with this character design and have a project that you feel my talents are suited for, don't estate to let me know! Prices are not "cheap" but they're negotiable, and more affordable than you think!
Posted by Elgin Subwaysurfer Bolling at 7:33 AM 2 comments: Links to this post