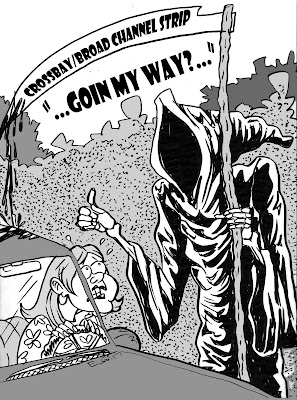 Sadly, The Grimm Reaper is making yet ANOTHER appearance in an editorial cartoon. No one's ever done a poll that I know of, but I would guess that The Reaper has starred in more cartoons than any other icon on the planet.

This editorial was done in response to the tragic death of a woman and her dog who were both struck by a reckless out of control, high speeding driver who plowed into them while they were walking on the sidewalk. What's more tragic is that this isnt an isolated occurance. In The Rockaways, their is a seven mile stretch of highway on Crossbay Blvd/Broad Channel leading into Howard beach where drivers ride their cars at breakneck speeds sometimes even on the sidewalk and the bikepaths. There are numberous flowers ribbons, crosses and other memorials that mark the passing of loved ones who have gone to meet their maker as a result of walking on that strip. Citizens are currently involved in petitioning the powers that be for much needed and long overdue guard rails and increased police presence in the area to deter speeding. At first I thought this pic would be rejected by the paper, but they felt it told the story perfectly. I consider it one of my best cartoons thus far.
Posted by Elgin Subwaysurfer Bolling at 9:28 AM No comments: Links to this post 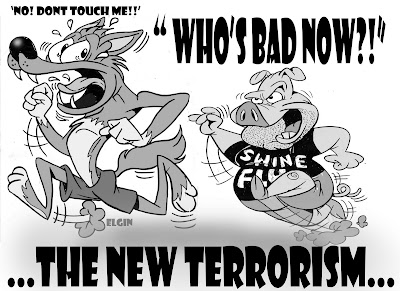 Recently drew this editorial toon for The Friday, May 15 edition of The Wave Newspaper, just to comment on the whole Swine Flu scare that's sweeping the country. I'm not sure if anyone thought of THIS particular angle on the whole situation, by it's such an obvious joke I had no trouble coming up with it this week.

The Big Bad Wolf seems like he's huffing and puffing to get outta dodge to avoid being touched by piggy wiggy here!
Posted by Elgin Subwaysurfer Bolling at 9:18 AM No comments: Links to this post