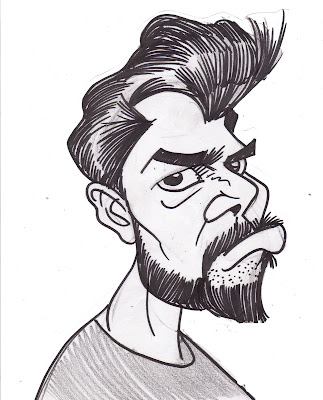 He Had GREAT Hair But Did NOT want to be Caricatured!!! LOL! He kept turning his head, changing his position and GLARING at me! LOL! He kinda reminded me of 1950's strongman, Steve Reeves, From those Hercules Flicks waaaaay Back in the day.. 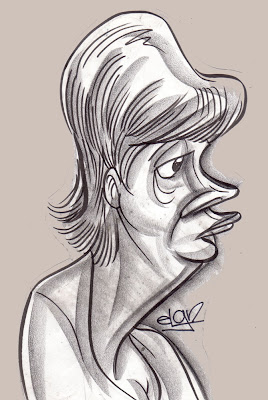 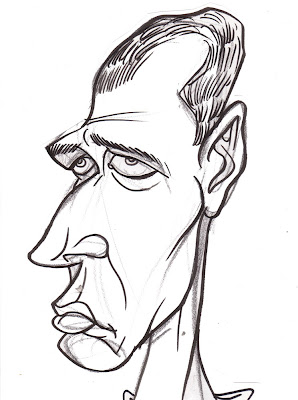 This Guy was from out of town, on his way to JFK at Howard Beach, heading back home to parts unknown. He had this look on his face that said, "HI, ENGLISH IS NOT MY FIRST LANGUAGE"

Wow, In all this digital caricature excitement, I totally forgot that I've been riding the subway and coming up with this great stuff here! LOL!  Enjoy!
Posted by Elgin Subwaysurfer Bolling at 11:06 PM No comments: Links to this post 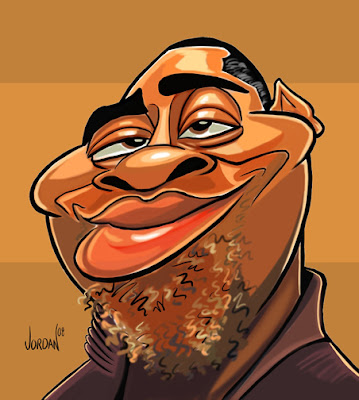 Some days I just sit back and smile thinking to myself how GOOD it is to be ME!  Not only have I been inspired by the best,  taught by the best, but also DRAWN by the BEST! Since I'm featuring so many of Angie Jordan's Vids here, I thought it only right to Show off My personal Digital Caricature Done by Angie herself! I've have some great artists draw me before, but Angie captured that "something" in my expression that makes this picture instantly recognizable. What an inspiration! As far as my digital caricatures go, folks, THIS is what I'm shooting for.
Posted by Elgin Subwaysurfer Bolling at 10:55 PM No comments: Links to this post

Posted by Elgin Subwaysurfer Bolling at 10:22 PM No comments: Links to this post

HEY! I think Im getting to LIKE this Digital Drawing thing! LOL! Sketchbook pro has got the COOLEST painting tools that makes painting hair a pure joy! I cant WAIT to show you what Im coming up with tomorrow! Practice makes perfect and this pic only took me 30 minutes... not perfect, STILL a LOT of work to go on my painting technique, but Im coming along... step by step... pixel by pixel...BIG SHOUT OUT TO KENLY DILLARD, who gave me some much needed instruction on painting...

I'm beginning to get a feel for the Pogo stick...ugh... The trick seems to be to NOT STOP when you're doing the serious part of the drawing. I also see that I probably WILL be going the "cartoony route" when I do this live. I saw an excellent vid by Angie Jordan where she demonstrates this,and MAN does that Lady know her stuff! 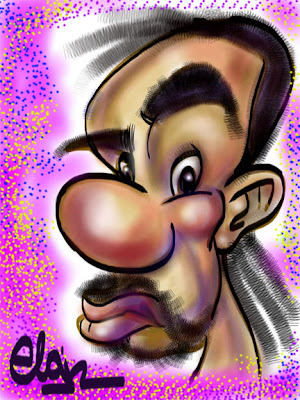 Posted by Elgin Subwaysurfer Bolling at 10:09 PM No comments: Links to this post

In search of the right Ipad Stylus... 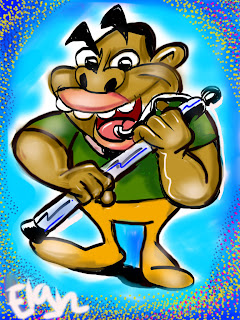 It didnt take me very long to discover that the POGO STYLUS is NOT the best tool for drawing. It starts OUT well enough, fresh out of the box, and is good for about an hour of drawing, but its all downhill from there, IMO. The point of it literally drags across the screen, and is reminiscent of a giant cue tip. It just doesnt FEEL like a pen in your hand , and when I would hold my stylus at certain angles It had difficulty making a mark.

Needless to say, I am in search, like so many digital artists, who have come before, of the PERFECT  STYLUS! at least for ME.  I'm currently viewing as much material as I can on the subject, and of course I want the cost to be as minimal as possible, BUT am willing to "spend the money" just to find something that works.
For those of you who are ALSO looking, Maybe you may find the info below useful.
Gee... is it just ME, or did I actually make myself look like a Baby Gorilla in the caricature I drew of myself???
Posted by Elgin Subwaysurfer Bolling at 2:24 PM No comments: Links to this post 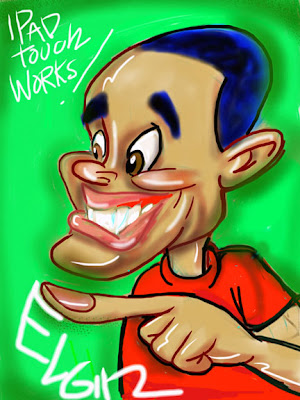 At the urging of Angie Jordan, The Worlds First ipad caricaturists, I purchased sketchbook Pro, the digital program of choice among caricature artists, and went to work on my first.SERIOUS color caricature using the software and this device. Right now I'm getting over the learning curve of adjusting to the slight time delay of the Pogo Stylus as it draws on the pad, the location and choice of different brushes and settings, as well as the art of painting itself, which until now, I all but ignored. I started the above sketch at 9pm last night working slowly in layers first laying down the initial blue line sketch in one layer, then gradually building up the color on subsequent layers. For an artist like me, who prides himself on his speed and accuracy, the slowing down process took a LOT of gettig used to, but was very satisfying as I explored new ways to color and shape my drawing like some digital sculpture. I looked up and it was 11PM. Where did the time go? I wasn't tired, and determined to COMPLETE this drawing, I put my head down, grasped a cup of lipton and continued. The next time I looked up it was 5 in the MORNING!! I had literally been at this for 8 hours!  This fact alone is phenomenal , as i am a BIG fan of getting a good nights rest, but like many people around the world, I am caught up in the ipads spell. It's not perfect, but Im very satisfied with the results of my second picture. It's GOT to get easier from here! I cant imagine going to a party and spending 8 hours on one face... unless its a very GOOD caricature!

WIth renewed confidence from the previous all nighter, I attacked this self portrait with gusto. As a result of my 8 hour ordeal, this painting came a lot easier, although it still wasnt QUICK. It took approx three hours to do. I wanted it to look kinda sorta realistic. Closer at least to how I actually draw caricatures. I can see by the way the materials perform, or at least the way I interact with them , that when I start using the ipad for party caricature I will probably lean more in the direction of cartoony caricatures, rather than the cartoon portraits  that I normally do. On another note, I can see the ipad is excellent for making quick wireframe sketches and later printing out the result to go over in marker like I have done for years. 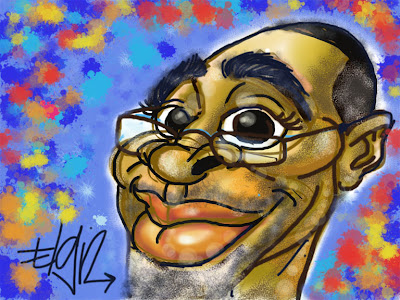 Posted by Elgin Subwaysurfer Bolling at 2:20 PM No comments: Links to this post