Indian man on the subway with the rock star hair

The challenge of drawing from life on the trains like I do, is that there's no guarantee how long your subject is going to be there. They can exit the train at the next stop, move to anither seat, start reading a newspaper, or have anther passenger stand in front f them, obstructing your view!(all of which happen to my dismay) it's for this reason that I have to train myself not only to draw fast, but also to "see fast" and to remember what I see. Often, the initial sketch like this one, is so incredibly sloppy that you wonder if it's ever going to become a good drawing. But "good drawing" should ever be the focus wen doing the initial sketch. Most importantly, I try to get the major details (the "headlines") of te face down on paper first, and worry about the smaller stuff Katerina. It's here in this initial stage where I clearly identify the arts of the face I want to maximize and minimize. I love drawing people from India and the mid east mst f all, because I find so much variety, contrast and humor in their faces.
I frequently draw on colored recycled notebook paper because fr subway sketching, I don't want to alert my subject to what I'm doing. If I have a notebook they think I'm just another student or writer. 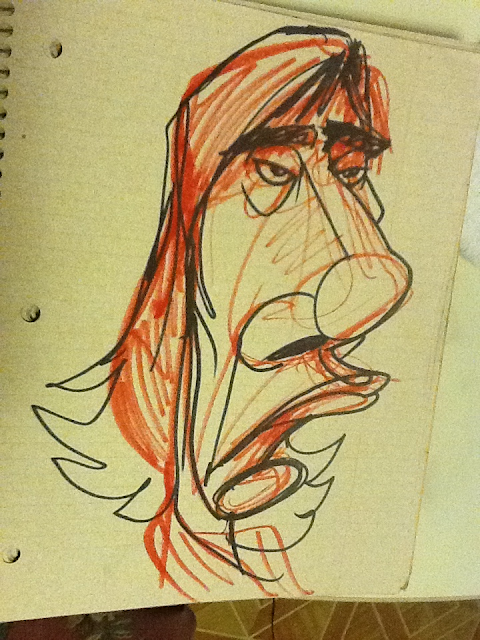 Once I'm satisfied with the sketch, I take a picture of it ane email it to myself, and then open it up in the iPad app, "Art Studio" since getting the iPad device I've abandoned Photoshop altogether, finding that Art Studio does pretty much the sae thing, and as the added benefit of the touch sensitive screen. I put down the base colors on one ayer then use a separate one to shade the picture using the airbrush tool. 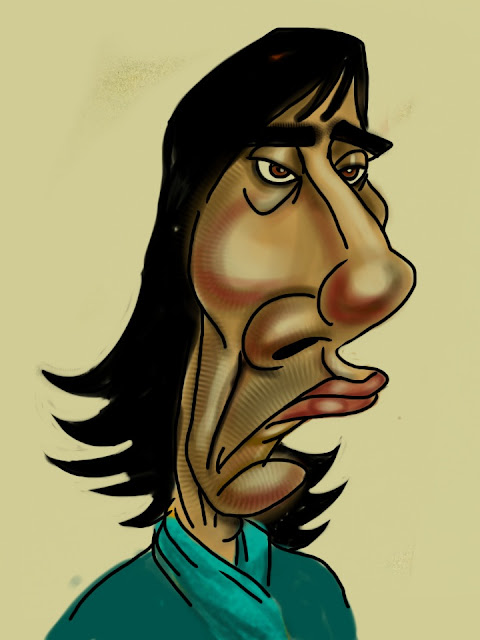 I find that because of my subjects complexion he appears to be blending into the background a bit much, and I want him to pop off the page. After a couple of minutes experimenting I decide to go with this greenish color that does the trick. I also decide that I don't really like the harsh outlines on the inner features of the face and use the smudge to to eliminate tem and to blend so I have a mire realistic look. I also use the smudge tool to get rd if the rash cartoony edges of the hair, deciding on a more feathery look. It works perfectly. Finally I add whisps of white hair to the dark strands which adds to the drama of the face. 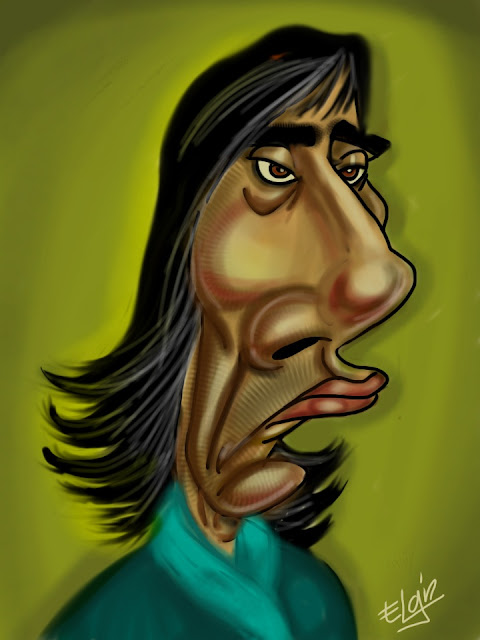 Posted by Elgin Subwaysurfer Bolling at 1:33 PM No comments: