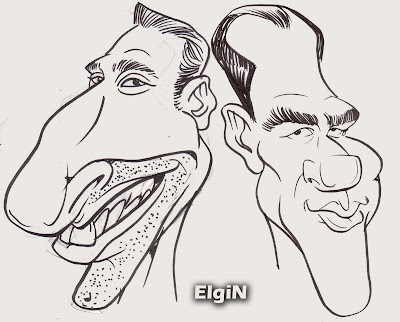 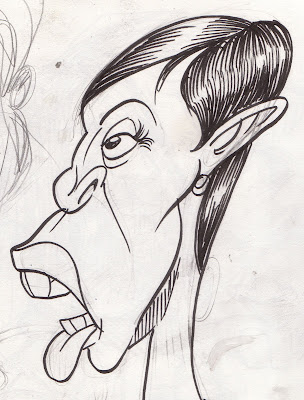 Dont know if I ever mentioned it, but Mad Magazine Artist, TOM RICHMOND, is a MAJOR influence om my style of caricature, particularly my party style, along with Kendly Dillard, adn Ed Steckley.
Like most caricature artists,I grew up reading MAD and was mesmerized by Mort Drucker. TOM took on the mantle of Drooker adding his own particular flavor, while style retaining that "Drooker'esque" vibe. Likeness is essential with a littttle exaggeration , but not in a grotesque way. Here is a pic of two "homies" I did at a party some time back I forgot to post. I also drew a caricature of Pastor Fredrick Price's Wife while watching TV one afternoon

This is a workable party style I use when I want to do a little exaggeration, and NOT offend the party goers TOO much. It's nice to have an assortment of "caricature styles" in your trick bag that you can pull out at WILL in order to get a job done. Being able to move seamlessly from style to style depending on the job takes years of practice, but once you have that mastery live drawing truly becomes FUN to do, and not a chore. I've been with other artists who seem to labor so much over their pictures at a live gig, that they really seem like they arent haveing a good time at all, which is a SHAME because IT'S A PARTY!!

These were drawn with a PITT Artist pen. I know Ive been singing the praises of the SHARPIE marker for a while now on this blog, but the ole Pitt is STILL the king for line quality and crispness. When it WORKS there's no smoother pen out there!
Posted by Elgin Subwaysurfer Bolling at 8:09 PM 1 comment: Links to this post