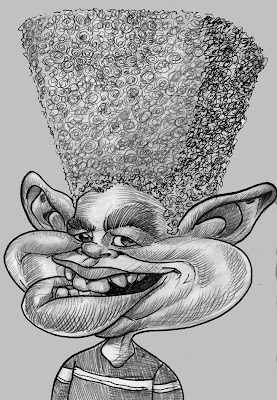 It was a slllllllow retail day at the Hotel that afternoon,and I was not making a dime. Frustrated, tired, and bored, I was ready to pack up and call it a day.

Then I spotted HIM looking at my caricature stand.

This kid was a caricature artist's dream. He had those chubby hamster like cheeks that looked like mini water baloons attached to his face, huge pointed ears that stuck out like open car doors, each one at a slight 45 degree angle, but that wasn't all! He had these great bushy eyebrows, and to top it off a literal crown of thick black curly hair that sat majestically on the top of his head like a miniature rectangular skyscraper! I was in carciature heaven!!! He came over with his sister and brother and asked how much the pictures were. When I quoted the price for color is heart sank a little bit, but determined to get a picture from me sat down and decided to get a cheaper black and white job.
I didnt really care. It had been a slow day and not only was I finally going to make a little money, but I was going to draw a picture of this kid who was a caricature artist's dream! I drew his picture immediately and he was almost beside himself with laughter and delight. It's not often that people actually LIKE highly exaggerated caricatures of them. I drew his brother next, and saved his older sister for last. As is my habit when drawing, I began to make small talk asking her questions about various things and asked her how she had come to stay in the hotel that i was drawing her in. She said quietly that her family's home had burnt down the previous night and they were staying there until they could find a place to live.
My heart sank, as she reached in her pocket to pay for the caricatures. I told her to forget about payment, and proceeded to change her black and white caricature to a full color one. Her face brightened a bit, and she broke into a smile not expecting this. I did the same to her two brothers' pictures, all the while making casual conversation while fighting back tears and emotion. I thanked them for stopping by my stand, and as they left to go back to their rooms I heard the youngest one say, "He's a good man, right?"
It's times like this that you realize that you really can make a small difference in somebody's life just by this simple act of drawing. Money cannot buy the respect of a child, and that kid didnt realize that the gift he gave me was worth more than anything I could've made.

This is a memory sketch of that kid who blessed me that day.
Posted by Elgin Subwaysurfer Bolling at 3:34 PM 3 comments: Links to this post