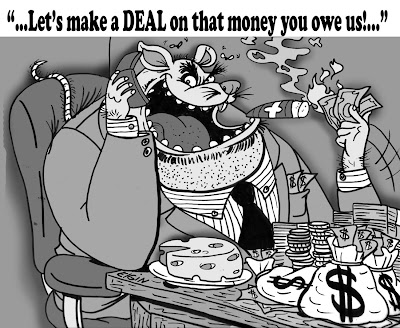 In this Editorial segment, the writer of The Wave put the much needed, long overdue spotlight on dishonest dirty rat debt collectors who scam millions of New Yorkers out of their hard earned cash. Maybe YOU'VE even gotten a call from these con artists wanting to play "lets make a deal" over the phone, having you pay money of debts that ARENT YOURS.

Beware Of Dishonest Debt Col-lectors
New York State Attorney General Andrew Cuomo is on a mission. Just two weeks ago, he sued 35 law firms and two debt collecting firms that operate in the state in order to throw out more than 100,000 default judgments improp-erly obtained against state citizens. Here’s the way the scam works. One day you open your mail, and you get a debt collection letter from a firm you have never heard of about a debt that you never incurred. One recent letter that has hit Rockaway homes purports to come from a company collecting for Veri-zon that seeks to collect a few hundred dollars that you owe on a phone num-ber you never had. Two or three weeks later, the telephone calls begin. When you explain that you don’t owe the debt, the person on the other end of the phone says that you do, and offers you a “deal” to pay off for half the amount owed. The letters and calls continue, and eventually the person on the other end of the phone says that the agency is going to court against you, and it does. The problem is, agents of the company certify to the court that you have been served with a subpoena to appear in court on a certain day, when in fact you have not. When you do not show up on the appointed day, the agency gets a judgment against you. That judgment is then sent to your bank, and your account is seized, even if it contains monies from social security and pensions, something that is not allowed under the law. The banks find it easer to simply obey the court order than to check where the money in the account comes from. Now, however, Cuomo wants all of those default judgments overturned, something for which we should all applaud him. As a consumer, you have cer-tain rights. You have the right to ask the caller proof that you owe the debt, but it must be done in writing. You have the right to see credit card receipts and other documentary proof that you owe the debt. And, should your bank account be seized, you have the right to appeal that with the clerk of the court, arguing that you were never served with the subpoena. Don’t take the debt collectors lightly. Many of them are crooks, out to take away your hard-earned money.
Posted by Elgin Subwaysurfer Bolling at 11:44 AM 1 comment: Links to this post