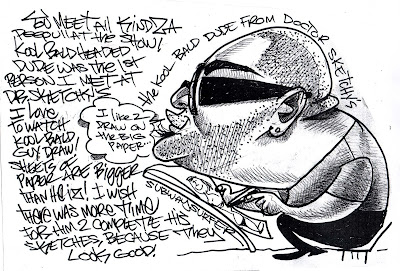 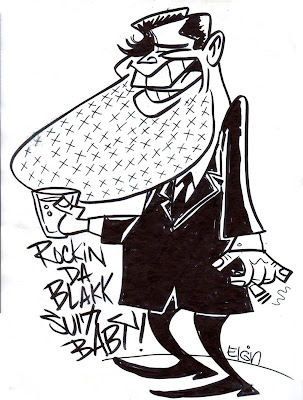 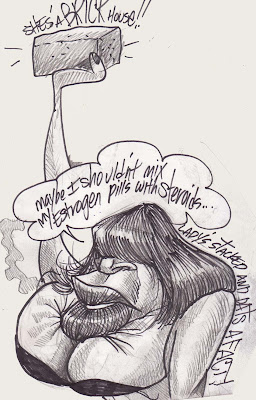 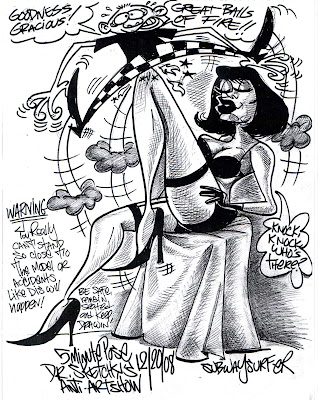 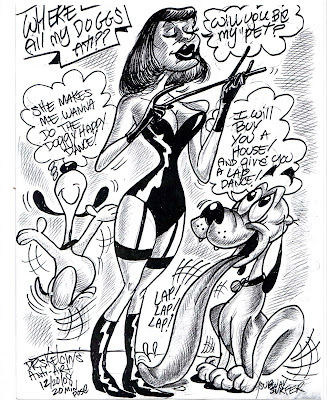 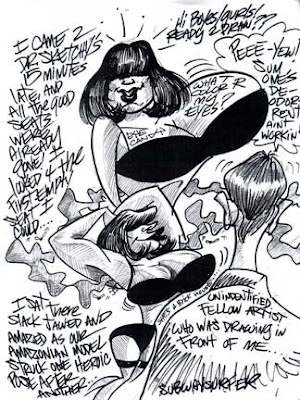 I attended a Dr. Sketchy's Life drawing class along At Kenly Dillard's and Laurie Edmond's urging, a few months back, and couldnt resist caricaturing the model over and over. If you're not familiar with Dr. Sketchy's format, there's a lot of loud music, and the artist models dress in these elaborate, sometimes outlandish costumes and pose on stage for five ten, and fifteen minute poses. In this particular section, this lovely lady for posing with a midget companion, but he wasnt interesting enough for me to include him in the shot. The music often adds inspiration, as always to what i am drawing and when the record, great balls of fire came on, the joke came naturally. The Host was interesting to draw also, in his black suit, as was the Bald artist next to me with the BIIIIIIIIIIIIGGGGG sketchpad.
Posted by Elgin Subwaysurfer Bolling at 4:55 PM No comments: Links to this post 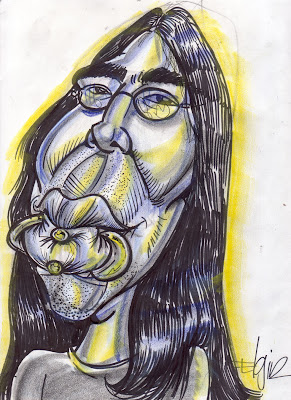 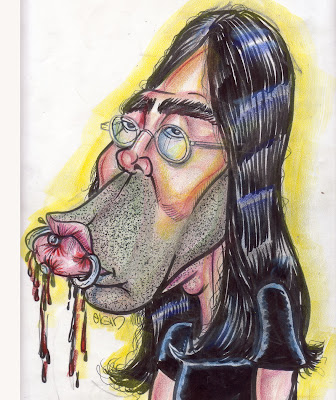 I drew this caricature of this dude on the street a couple of weeks back at Union Square. Him and His gurlfriend, which i will post later were the only two Id done that day.What struck me about him and her were their piercings on their lips. he claimed it didnt hurt, but that it did interfere with kissing sometimes..... ya think????
Posted by Elgin Subwaysurfer Bolling at 4:01 PM No comments: Links to this post 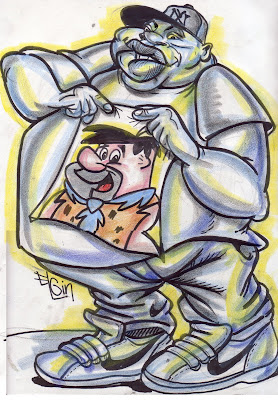 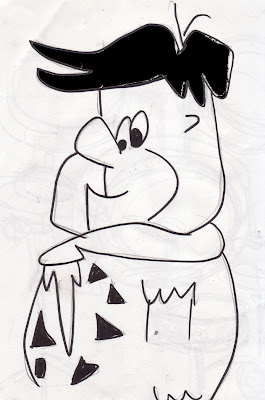 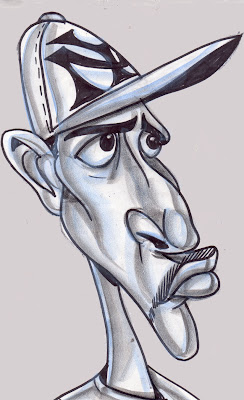 "Oh man.... PLEASE Dont hang out here"
That's what I thought to myself returning home late from a great gig I worked in Crestwood New York this weekend. As I mentioned in an earlier post, traveling is murderous on the trains during the weekend, and I felt like I was riding forever....I was tired, hungry, wet with perspiration,....and of course drawing on the train as usual.
The car wasnt particularly crowded , and i was just finishing a previous sketch I had done when the mountain of a man figure stopped short directly across from me.
This guy was BIG. Well over six feet, easily about three hundred pounds or close to it, and dark and imposing. He reminded me at first glance, Biggie Smalls, an I dont mind telling you I was beginning to feel a little intimidated, wondering if he was going to pound me into an ink spot....
Of course all the while I was wondering this I was madly sketching his massive form.
All of a sudden he asked me the most surprising question;
"So, are you drawing a Still Life?"
I hadnt pegged him for an artist, and laughed out loud,. exclaiming that a still life was the last thing I was drawing and commented on how boring they were. I asked him if he was an artist and he explained that he was when he was younger, and went on the tell me at length, the stuff he'd drawn as a kid.
" I used to pretend to draw portraits of kids, and then I'd show them a picture of Fred Flintstone that I drew instead," he said, smiling at the memory that brought back. I invited him to sit down and challenged him to draw me a Fred Flintstone on the spot which he nervously did while the train rocked back ande forth. ( I sometimes take for granted how well I can draw on a moving train.)As he was drawing Fred I took time out to finish my caricature of him, AND a bystander/on looker who sat across from us and had taken interest in our conversation. I asked him why he hadnt continued with his art and heard him say that he abandoned it because he "couldnt get anything going" (financially ) with it. my haart went out to him as I realized tht he, like so many artists, had abandoned their gift just because of financial pressure and lack of encouragement. I once again felt very blessed to be able to enjoy a measure of financial success as an artist.
As we parted I gave him the caricature Id done and he was really touched by it. I encouraged him to start drawing again for HIMSELF and not for financial gain. The money would come, but even if it didnt, I told him the art was something personal he could use for his own satisfaction and mental health. He nodded in agreement, and took one of the comics that I gave him as well. I told him that the comic I was giving him was drawn by the top unsung underground cartoonist ever. He smiled when I gave it to him, recalling that he'd read the work of this artist before.
It was a Track entitled, "The Sissy" by Jack Chick.
Posted by Elgin Subwaysurfer Bolling at 3:33 PM No comments: Links to this post 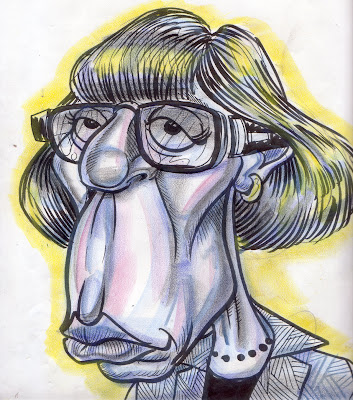 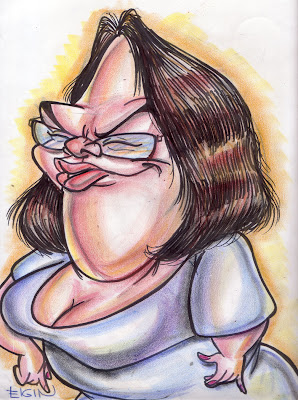 They're both a little old to be called "babes" technically, but maybe it depends on your age perspective! i aint gettin any younger ya know! The first pic is of a lady I sat INCHES across from on a Grand Central Bound Metro North train returning from Crestwood, NY this weekend. She was so excited about the possible acquisition of a new house she was buying with her husband seated next to her, that she didnt seem to notice me sketching her. I tried by best to get him in the picture too, btu he made driect eye contact with me EVERYtime I looked in his direction. I was pretty lucky to get his wife without him saying a word of protest.

The lady at the bottom was going out on a night on the town with her husband. I caught her on the L train that I had to catch back into Manhattan that same evening. On the weekends, the trains are terrible here in NYC so you often have to take a train that goes out of your way, just to get to your destination. Since i live in the Rockaways, it's always a great adventrue getting home on the weekend.I initially sketched these pictures on 9X12 paper in my trustie, "BIGGIE" Sketchbook. I did the inking and the coloring today. I HATE to admit it, but I actually outline it with a dreaded....ugh.... SUPER SHARPIE Marker!!! There I said it!!!

For those of you who dont know why Im gagging, it's only because no self respecting caricature artist would ever be caught dead using a SHARPIE makeer, and to use one spells "beginner" more times than not. Fellow Caricature artist, Speedster, Adam Pate swears by them, but ive always been partial to Tombo Brush Pens and Pitt Brush pens for my linework.
Recently, I was forced to use a SUPER Sharpie at a gig when my other markers dried up on me. I found that I liked the feel of it in my had, it bave me a consistant flow of ink, and was avaiable in most stationary stores. It's slowly becoming one of my favorites! although it is kinda sucky for doring hair. I still will use the brush pens for that.
Posted by Elgin Subwaysurfer Bolling at 3:17 PM No comments: Links to this post