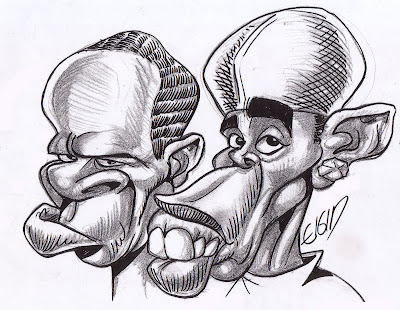 Never get tired of drawing "da Brothas" they really WORK at that "machismo look
Really do love drawing African Americans. Since I live in an African American community, I of course get a lot of opportunity to draw and observe. Among AA youth, a lot of emphasis is put into having the right "look". This is understandable and sad considering the harsh environment and circumstances some of these kids have to endure on a daily basis. Having the right "look" becomes an initial line of defense in the Urban Jungle, and even your average street thug wants to pick out what he perceives to be an "easy" victim. Even so calked "civilized " folks who live in the hood have a kind of look that says "I belong here" from a purely anthropological standpoint it's fascinating....
Not all of these kids are thugs, despite their visual abd verbal posturing. Many if them are articulate in speech, intropective, and artistic. There seems to be a type of respect they have for creative types. I've had what other folks might consider thugs, encourage me in and admire my creative work. In some cases, I even catch one if them drop their mask have reveal a little if their personalit, like this kud I drew wearing the "doo rag".

A lot of caricature artists, especially white ones, shy away from caricaturing common, objective features African American features like large white noses, and big lips, for fear of being perceived as "racist" This is ridiculous. It's like accusing an artist as being anti Senatir because he draws a Jewish an with a big nise...who happens to objectivey have one.
Posted by Elgin Subwaysurfer Bolling at 8:31 PM No comments: Links to this post

Labels: caricature in pen and ink

I SWEAR THE NEXT ONE WHO PINCHES MY CHEEK IS GETTING A KNUCkLE SANDWICH!! 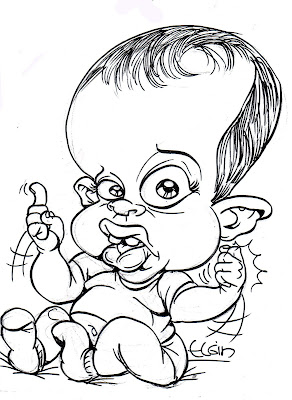 Ive gotten REALLY GOOD at drawing Babies! LOL! to think I used to really DREAD drawing the little tots years ago! Once you get past the stereotypical way of drawing and viewing them, if you really look carefully, they've got just as much personality quirks as anyone else, and they're facial expressions are really hilarious if you just pay attention for a few moments and look.
Posted by Elgin Subwaysurfer Bolling at 8:26 PM No comments: Links to this post 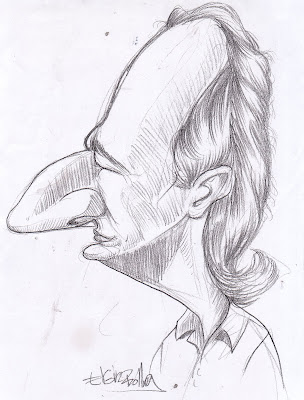 As much as I love to do gift caricatures digitally, I love the feel and look of a caricature done with my own hand in pencil. My approach to caricature drawing is not just for simple "party whimsy" but for fine art as well. This should come as no surprise, since caricature uses portraiture as a point of departure.

Let me create a beautiful pencil portrait caricature of you. Your love ones or for the someone who wants a unique personalized gift. Prices are affordable, and I am open, within reason to negotiation. Feel free to write me at
Cartoons4u2@aol.com
For more information.
Posted by Elgin Subwaysurfer Bolling at 8:24 PM No comments: Links to this post 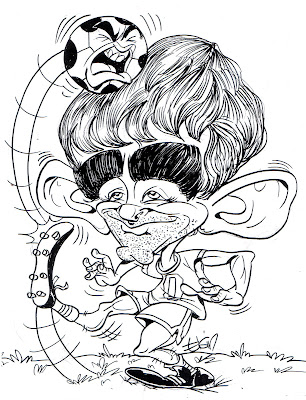 I drew at a great party last week in Besnsonhurst Brooklyn, and got the opportunity to meet and draw, local hero, Peter Barone, the Soccer coach. No, Mr. Barone, isnt "nationally known" doesnt have his own line of sneakers, or has his pic plastered across a cereal box, but Peter coaches soccer to a group of local kids, most of which were at the party,and doinng THAT makes him a hero in my book. It's so important that children have role models to look up to, especially strong male ones who are willing to spend time, provide guidance and teach them the neccessary skills they need for LIFE. Peter may beel that he's "just teaching kids how to kick a ball" but so much is learned on the field about fair play, teamwork, being able to push hast pain and exaustion, and even being able to lose graciously after doing your best, are skills that children learn early and carry with them into the world that ultimately benefits their families, their workplace, their community and their world.

Not to mention that I think Pete's muc is a SCREAM to draw and I promised him that I would DO THIS HA!!! I personally think it's one of the best Gift Caricatures Ive done this year.
Posted by Elgin Subwaysurfer Bolling at 8:16 PM No comments: Links to this post