Cat in the hat. 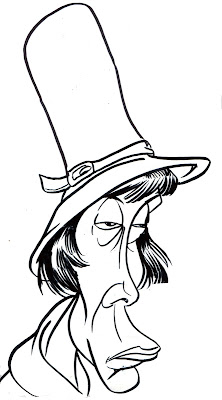 Whereever she bought that hat...

I hope it's the last one.
Posted by Elgin Subwaysurfer Bolling at 6:20 PM No comments: 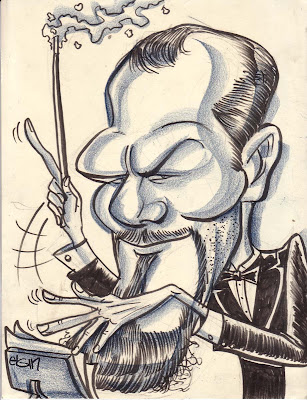 I had the pleasure of meeting Professor Charles Brown, M.M.
Assistant Professor of Music
Director, Choral Activities
at Concordia University recently, and this is my first attempt at doing his caricature, as promised, from memory. I had a bad pic to work with but was determined to do what I promised, so this is my FIRST attempt!
While in Chicago I had the pleasure of hearing Kapelle, Concordia’s choral performance ensemble, which Professor Brown conducts, and which my son and daughter are members. A little known fact about the surfer is that in addition to art, one of my passions are music and I sung to my kids ever since they were toddlers and apparently they inherited the gift although I'd be first to admit they are both much better singers than I am.
The Kapelle group tours extensively in the United States and abroad, and has over five recordings with one currently in production. I cant wait for THAT one as my son performs a solo on it! Dr. Brown, this caricature is for YOU! More to come...

In this caricature I wanted to portray him as an
"Evil musical genius"
Posted by Elgin Subwaysurfer Bolling at 5:37 PM No comments:

Ebony Mohawk Boye on the B Train 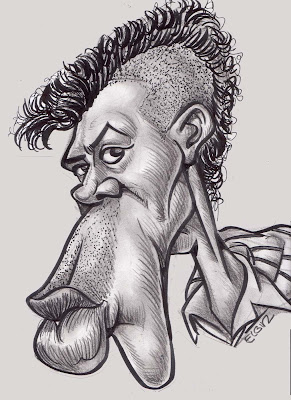 I squeezed my way onto a Kings Highway bound B Train, late for an appointment with my wife, and now frustrated that I wasn't fast enough to get a seat for the long ride. It was then that I looked down at this passenger that brightened my mood a bit.
Here was this teenager talking excitedly with his friend on this crowded standing room only train eating Chinese food out of a large Styrofoam container. We have a saying in the city that goes like this: "How Ghetto can you be?" one thing that is definitely a social "no no" is eating a PLATE of food on public transportation. Its just "too common" Too low Class, but there he was. Like most youth his age, he didn't seem to care, and kept eating and talking as if he was home at his dinner table. His appearance caught my attention as much as his behavior. He had a beautiful ebony complexion like dark chocolate that shined. He also was sporting this outrageous Mohawk mane of black hair that looked like a horses mane. His hair was trimmed neatly on the sides , almost shaven but not quite. His face was long and his frame was long and lanky. I thought he would make a perfect character design for one of my comic projects, and although Im not accustomed to drawing standing up during rush hour , I quickly whipped out my drawing pad and got started. It was challenging to draw as the train swerved and swayed, with passengers bumping into me, and me trying to maintain my balance, all the while hoping that he would not stop to notice me. I completed a few preliminary sketches hoping that when I got back to the studio I would be able to recapture what I saw. My results were more than satisfactory, and I know that i will be going back to this character for future projects. Here he is drawn in semi realistic style using a tombo brush pen and pencil.

REMEMBER FOLKS, IF YOU LIKE WHAT YOU SEE HERE, AND WOULD LIKE TO HAVE ME CREATE A CARICATURE OF YOU DRAWN IN  THIS BEAUTIFUL EXAGGERATED GRAPHITE STYLE, SEND ME AN E MAIL AT
cartoons4u2@aol.com
Posted by Elgin Subwaysurfer Bolling at 11:32 AM 2 comments: