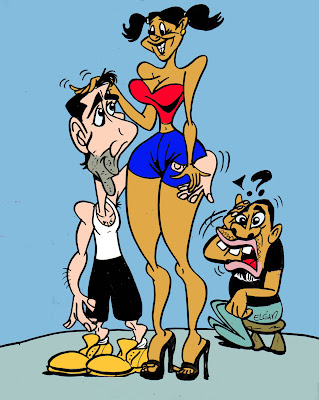 Let me start off by saying I have NOTHING against inter racial dating , marriage or pairing.... but seeing THESE two together on West 57th street and Bway caused me to shake my head in wonder. He was a very short male white , five feet soaking wet, with a scruffy look about him, unshaven, thick oily hair, wearing a tank top long cut off jeans and boots with no laces. She was a well over six feet, so much so that she appeared to be almost all legs. Extremely curvy and had this childs hair style on her head and this impish expression. They were obviously in love and very taken with each other, but were so visually striking that nothing less than this Cartoony rendering could capture my reaction.
I guess he was her "scruffy little puppy" and she was his "chocolate Covered Giraffe!"
Posted by Elgin Subwaysurfer Bolling at 7:48 PM No comments: Links to this post