Anthony Weiners name is on everybody's lips these days, and is a definite object lesson and warning to everyone that what you do online is "everybody's" business, so if you are a person who values your reputation, business or other wise, watch what you say, do, or post! It will come back to bite you!

Having said that, I wanna brag a little bit, and just let you know that THE SUBWAYSURFER drew him first! According to this repost of an Oct 16 editorial toon I drew for the Wave Newspaper in Far ROCKAWAY, there's Mr. Wiener taking center stage. To my knowledge, prior to this caricature I did, there were relatively few caricatures of him online. I did remember looking. Just another great reason why you should keep your browser pointed at http://www.Subwaysurfer.blogspot.com 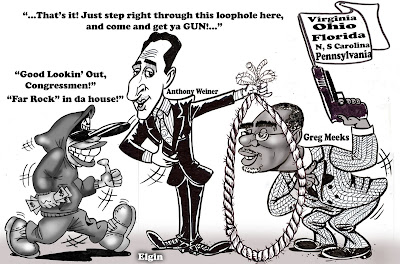 This weeks editorial cartoon is pretty explosive. It is sparked by a recent event that happened in the Edgemere Section of the Rockaways where police cars were brazenly fired upon by some trigger happy homies. This event set off MASSIVE manhunts in the area which was covered with police cars, helicopters, and beat cops in a matter of minutes. It seemed as if every police officer in Far Rockaway converged on that location. It was discovered that many of the guns reocovered in the shootings had been linked to illegal gun sales in Southern States, the buying of which were made easier by two Congressmen, which you can read about in the editorial reprinted below. This is by far one of the best Editorials I think that Ive done, and I know the paper is going to get letters on it claiming it is "racist" We'll see what happens... If I DO get letters, I will consider myself as "having arrived" as an Editorial Cartoonist. This Month, incidently, marks the one year Birthday of my coming on staff with The Wave Newspaper.
The ARTICLE:

Death On Our Streets
Thanks To Gun Show Sales

The findings of the federal Bureau of Alcohol, Tobacco, Firearms and Explosives has linked 30 percent of the guns used in New York City shootings to gun shows in other states. Earlier reports from the same agency as well as from the New York City Police Department show that the great majority of guns used in crimes here come from Virginia, Pennsylvania, North and South Caro-lina, Ohio and Florida, states with lax gun laws. A large number of those guns eventually show up on Rockaway streets or in our public housing projects. Many of them come from gun shows in those states, where individual sellers have no requirement ei-ther to check a buyer’s background or to file paperwork with the federal agency recording the sale. That gun show loophole exists because Congress, convinced by the National Rifle Association (NRA) that such show sales were made not by professional gun dealers, but by individuals who wanted to sell personal or an-tique weapons only. Mayor Michael Bloomberg sent investiga-tors to gun shows at some of those states and blew that lie out of the water. The investigators found not individual sellers looking to get rid of a gun or two outside the usual rules, but profes-sional dealers with dozens of weapons to sell. In one particular egregious case, the investigator asked if he had to go through a background check. The vendor told him he did not. The investi-gator then said, “Good, because I probably could not pass the check anyway.” The vendor sold him a semiautomatic .380 cali-ber weapon for $399. It is clear, at least to us, that our federal representatives, Anthony Weiner and Greg Meeks, have dropped the ball. Something must be done to close the gun show loophole, and it has to be done quickly before even more young people die on Rockaway streets.
Posted by Elgin Subwaysurfer Bolling at 10:26 AM